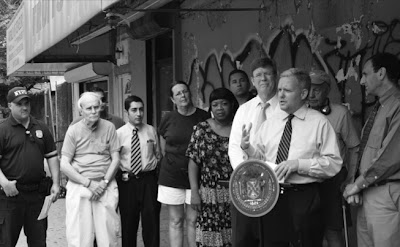 Council Member Jimmy Van Bramer, the Sunnyside Chamber of Commerce and CitySolve teamed up to battle graffiti throughout the community by launching a local Anti-Graffiti Campaign for District 26. To kickoff the campaign Van Bramer led a graffiti removal demonstration at the 99 Cent Store on 58th Street and Woodside Avenue.

Van Bramer has secured $30,000 for his district to fund this initiative in conjunction with the Sunnyside Chamber of Commerce and CitySolve. This program will provide constituents with a designated hotline and an email address to report graffiti and request FREE clean-up services. As complaints are received, teams of graffiti removal experts will be dispatched throughout the district to quickly remove graffiti vandalism.

“Graffiti vandalism cannot and will not be tolerated in our communities,” said Council Member Van Bramer. “Today we take a collective stance against such crimes and as a community we will come together in active campaign to remove the eyesores that destroy the quality-of-life in our neighborhoods. If you see something, please say something by calling our hotline or emailing us.”

The program contains three elements. The first element will consist of a comprehensive clean-up of four of the district’s most problematic areas—(1) Woodside Avenue between 69th Street and Roosevelt Avenue, (2) 47th Avenue between 38th Street and 51st Street, (3) Broadway between 38th to 58th street, and (4) 21st Street between Queens Blvd and 34th Avenue. The second element will include a monthly maintenance program to keep these problem areas graffiti-free.

The third and final element will employ a district-wide graffiti complaint hotline that will allow residents of Sunnyside, Woodside, Long Island City, Hunters Point, Dutch Kills, Blissville, Astoria and Maspeth in District 26 to call 718-383-9566 ext. 3 or email VanBramerFightsGraffiti@gmail.com to report graffiti conditions. These complaints will be routed to the local clean-up crew to remove the graffiti and are guaranteed a response time of seven days or less. The program will begin tomorrow, and will last until June 2011.
Posted by The Forum Newsgroup at 10:45 AM