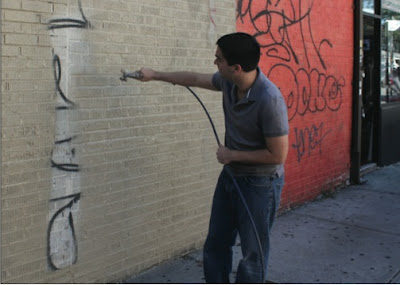 The owner of Empire Kitchen on 109th Street and Liberty Avenue watched in amazement as graffiti marking the side of her building was expertly painted. “It’s so good,” she said.

Thanks to the efforts of Council Member Eric Ulrich (R-Ozone Park), other storeowners along Liberty Avenue from 75th Street to Lefferts Boulevard can experience the same joy in the coming months.

Last year, Ulrich provided $25,000 of discretionary funds to the Greater Woodhaven Development Corporation specifically to clean graffiti along 101st Avenue, Woodhaven Boulevard and Rockaway Boulevard. The program also allows residents to report graffiti at any location within the district, to be cleaned within two weeks.

The program was an amazing success, resulting in the cleaning of more than 150 locations. Maria Thomson of the Greater Woodhaven Development Corporation applauded Ulrich’s initiative, and has been extremely pleased with how the program worked last year.

Margaret Finnerty from the Richmond Hill South Civic Association joked that when she first heard about the program she pestered Ulrich to include Liberty Avenue. Ulrich heard her call, and he acquired $35,000 this year to expand the program to Liberty Avenue between 75th Street and Lefferts Boulevard. Also new this year, graffiti on the second floor of buildings will be removed.

“[Graffiti is] a constant battle, and we have to work together to win it,” Finnerty said. “The merchants and residents along Liberty Avenue truly appreciate what the Council Member is doing for the area.”

Ulrich was tired of seeing his district covered with eyesores. “We are well on our way towards eliminating graffiti vandalism in our community,” he said. Seeing clean streets help residents and business owners feel safer, Ulrich said.

That sentiment was echoed by Thomson. “It’s such a psychological lift,” she said. “The program is worth every penny, and more.”

The graffiti removal is handled by CitySolve, which has similar municipal contracts throughout New York City. After an initial cleanup of the designated streets, CitySolve then returns each month to remove any new graffiti along those routes, and to respond to individual complaints at other properties.

CitySolve proactively cleans commercial areas along 101st Avenue, Woodhaven Boulevard, Rockaway Boulevard and now Liberty Avenue. There is no need for storeowners to file a complaint. Residents can report other incidents of graffiti to Ulrich’s office at 718-738-1429. These are forwarded to CitySolve, and Pienkny promises the graffiti will be erased within a week.

This rapid response is the difference between Ulrich’s program and calling 311, where complaints can take up to six months to process, Ulrich said.
Posted by The Forum Newsgroup at 11:16 AM