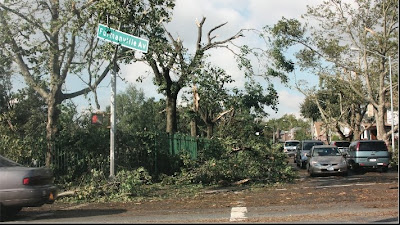 By Eric Yun
Parts of Queens and Brooklyn were rocked by two tornados and a macroburst Thursday evening. The swift storm tore down trees and power lines, leaving thousands without power. Locally, Middle Village and Forest Hills were among the hardest hit areas.
The National Weather Service reported a tornado with estimated wind speeds of 80 miles per hour hit Park Slope, Brooklyn at 5:33 PM. The storm travelled northeast for two miles before lifting. Another tornado with estimated wind speeds of 100 miles per hour occurred two and a half miles south of Flushing and lifted one mile northeast of Bayside at 5:42 PM.
Furthermore, a macroburst with winds up to 125 miles per hour was reported from Middle Village to Forest Hills. A macroburst is a convective downdraft of at least two and a half miles wide and peak winds lasting between 5 and 20 minutes. It can produce strong straight-line winds— differentiating it from a tornado and hurricane’s rotational pattern.
The devastating storms claimed the life of Iline Levaskis of Pennsylvania. She and her husband Bill had pulled over on the Grand Central Parkway when a tree fell and crushed the car. Bill Levaskis escaped with minor injuries.
As residents attempted to deal with the mess and devastation the storm created, NYPD, FDNY and other city agencies did whatever they could to clear the roads and help the injured.
In Forest Hills, the Forest Hills Volun- teer Ambulance Corp was activated to provide mutual aid to FDNY. They helped rescue a man pinned under a tree and a 40-year-old woman in labor was transported to Flushing Hospital.
“The Forest Hills Volunteer Ambulance Corps is proud to have been able to provide our resources and service to the FDNY and our community during that time of need,” said Ron Cohen, safety officer and official spokesman of the FHVAC.
A week after the storm, the majority of streets and utilities has been restored, but there are still pockets of areas where trouble persists.
Posted by The Forum Newsgroup at 11:13 AM