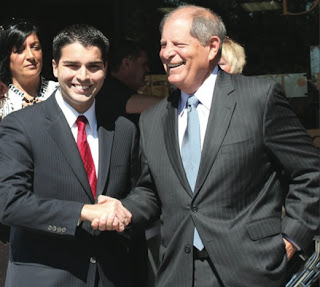 By Eric Yun
With the primaries over, political candidates are getting prepared for their November battles. Bob Turner, the Republican challenger to incumbent Democrat Anthony Weiner for the U.S. House of Representatives 9th Dis- trict, which includes parts of Brooklyn and Queens, visited Howard Beach and was en- dorsed by Council Member Eric Ulrich (R- Ozone Park).
Standing outside of Tuscany Deli at Lindenwood Shopping Center on 153rd Avenue, Ulrich gave his full support towards Turner’s campaign. “Washington has really gone astray,” Ulrich said, “And the only way to change that is to send people like Bob Turner to Congress.”
“With the help and support of the people who put me in the 32nd Council District, we can send Bob to Congress,” Ulrich continued.
Turner thanked Ulrich for his support, and he stressed that he’s a businessman—not a politician. “There are so many things wrong with the direction this country is taking,” Turner said. He promised to use his business sense to eliminate waste and spending, and to “get us back on track.”
Posted by The Forum Newsgroup at 11:20 AM