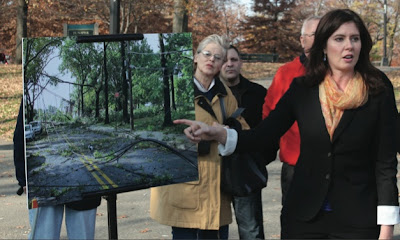 On the night of September 16, a tornado and microburst swept through the area leaving a trail of trees and power lines scattered across Middle Village streets. The destruction created hazardous and unsafe condition and left thousands without power. Now, Middle Village residents, Councilwoman Elizabeth Crowley (D-Middle Village) and Representative Anthony Weiner (D-Kew Gardens) are calling on Consolidated Edison to remove the dangerous overhead cables and place them underground.

On the night of the tornado, downed power lines sparked fires throughout Middle Village, and created a mess Con Ed and other utility companies had to untangle for weeks.

“The tornado and microburst highlighted the vulnerability in our power grid,” Crowley said. “It’s time to bring Middle Village into the 21st Century and remove the outdated overhead power lines.”

Crowley and concerned residents argue that they pay the same price for power from overhead lines as underground lines, but suffer from more outages and safety hazards. And while Crowley’s biggest concern was safety, she said removing the unsightly wires would help beautify the neighborhood and help local businesses.

“We were very fortunate the day of those storms,” said Weiner. Now, he added, it’s time for Con Ed to modernize the community and ensure residents never again have to worry about live wires on the ground.

“When I see trees down I’m saddened,” said Middle Village resident John Debiase, “When I see lines down, I’m frightened.”

Crowley and Weiner both noted that unsafe, ugly power lines are not something residents of Manhattan’s Park Avenue have to deal with, and the same should be said of Middle Village.

Underground cabling is common in New York City and Queens. According to Con Ed, there are 24,795 miles of underground cables in the borough compared to 6,995 miles of overhead cables.
Weiner questioned why Con Ed has not already begun modernizing the area with un- derground power lines. “The simple answer is Con Ed is trying to do things on the cheap,” he said.

Con Ed does not intend to place Middle Village’s power lines underground, and money does play a factor.

According to Con Ed spokesman Chris Olert, the cost to move overhead lines underground is $6 million per mile, which would be passed onto all of their customers. Furthermore, residential customers would likely have to pay $7,500 more per year, and commercial customers would have to pay $20,000 more per year to pay for the upgrades. Olert also said underground lines are not without problems, as it takes three to four times longer to identify and fix problems with underground lines.
Posted by The Forum Newsgroup at 3:49 PM