From Howard Beach to Hollywood: Chasing the Dream 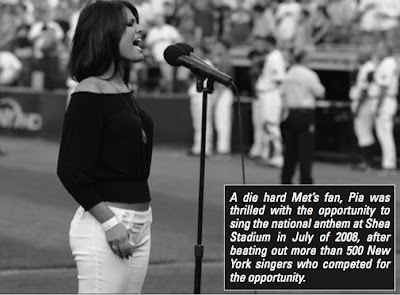 Over the last few months, more than 125,000 people brought their talents and dreams to American Idol auditions in seven cities across the country. They carried with them the same hope—to be chosen as a contestant for this year’s season of the hit Fox television show.

Within a few short weeks of nationwide auditions, the numbers were drastically reduced. Only 327 contestants were informed by the judges that they were “Going to Hollywood” to compete in the show’s famed Hollywood week.

The remaining hopefuls were dropped with successive elimination rounds in Hollywood. From 327, the number was reduced to 60, and then to 40. Now unofficial reports and blogs listing the final 24 contestants have been published, and the official results will be aired this week.

And so after Thursday night when the announcement is made and the fanfare is over, still standing on the stage—having been chosen over the 124,976 singers that went home—will be a 22-year-old wedding singer from Howard Beach: Pia Toscano.

Despite her young age, the quiet and unassuming singer has already been engaging audiences for the last 18 years. “We have video of Pia when she was four,” proud father Pat Toscano said. “She was singing Whitney Houston.”

Toscano admits that the fervor to support his daughter’s career is somewhat fueled by the musical aspirations he had at her age, which he was forced to set aside because of familial obligations. “I had to get a job that paid,” he laughs. “My father didn’t quite see the merit of my band.”

But Pia knows nothing about fighting for parental support in the quest for singing stardom; Toscano and wife Jane are arguably at the top of Pia’s support system, along with her sister Kim, a timpanist for the Tucson Symphony Orchestra.

“Her heart is more beautiful than anything,” Jane Toscano says of her daughter. “Pia loves people and has so much to offer as a role model for younger kids.” Such high praise from a mother is expected, but many others around Howard Beach, where Pia grew up, share similar sentiments.

Starting with fellow Howard Beach resident Phyllis Inserillo, who was Pia’s religion teacher at St. Helen’s when Pia was a teen, it seems her mother is right—everyone loves Pia.

“She owes me everything,” Inserillo joked. “She was 14 when I gave her a start singing at my wedding.” Inserillo went on to tell The Forum how she learned of Pia’s voice. “We [our class] had taken a trip to a local firehouse right after 9/11 to bring some home baked goods and cards for the fireman.” At the firehouse, one of Pia’s classmates suggested she sing. “After I got beyond the shock that such a huge voice was coming out of a tiny little body, I was an instant fan. I knew Pia was special,” recalled Inserillo. Everyone in the crowd, moved to tears by Pia’s stirring rendition of God Bless America, was in agreement with Inserillo.

For Pia, it was just the beginning of appearances throughout the community, always giving her time to charity events and helping whenever asked. Over the years it has not only been her voice that has attracted such loyalty, it’s also been the humble and warm personality that goes along with the tremendous talent. Sadly, her number one fan is not here to share the excitement. Grandpa Jay, whom Pia refers to as her hero, passed away a few years ago. “From the time Pia could talk, all she wanted to do was call her Nana to say she was coming over to be with Grandpa Jay,” her mother said. “Their birthdays were one day apart and they were inseparable. I’ve never seen a relationship like that before.”

In fact, Jane says when she was pregnant with Pia her father would accompany her to every doctor’s appointment. “He would look at the sonograms and say—‘I think she looks like me.’” And according to all who knew them it isn’t only looks Pia shared with Grandpa Jay—it’s a kind and loving nature.

Back in 2006 as an Idol contestant, when Jay’s health was failing, Pia was devastated because she didn’t make the cut after Hollywood week. “She wanted to give him his dream; he wanted to see her name in lights,” said Jane Toscano. “But my father was a patient man. He’s watching all of this right now and believe me, he couldn’t be happier.”

Grandpa Jay is now joined by the rest of America, especially Howard Beach, waiting to see how far the little girl with the big voice—and the bigger heart—will rise in the ranks of America’s most prominent talent competition.

The Forum will continue its coverage on this amazing journey every week with “Idol Watch— How’s Pia Doing?” Please join us and if you have something you’d like to tell us about Pia or just wish her well, contact us by e-mail at forumsouth@gmail.com or fax at (718) 738-7645.
Posted by The Forum Newsgroup at 11:27 AM