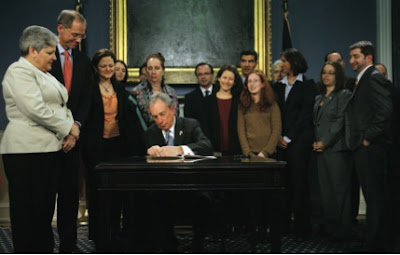 The city’s air is about to be a little fresher. With a blot of ink and a flick of the wrist, Mayor Michael Bloomberg made the extension of the smoking ban to city parks and beaches official. As of February 22, smokers had a little less city space for their butts.

"Frederic Law Olmstead hailed public parks as the 'lungs of the City'—a haven where one could escape the overcrowded, noisy, and polluted streets,” Bloomberg said. “We need to en- sure that our public spaces provide just that - a healthy place in which to relax and enjoy the surroundings.”

New York passed the city’s first Smoke Free Air Act in 1988, and amended it three times. In 2002, smoking was banned in indoor public areas. The city has also banned the sale of flavored tobacco and the Department of Health launched annual smoking cessation programs.

"Because of our combined efforts over the last nine years, there are 350,000 fewer people who smoke and New Yorkers are living nineteen months longer than they did in 2002,” Bloomberg said. “But there is still work to be done.”

Not everyone in the city is praising the ban. When City Council approved the bill, the vote was 36-12. Councilmember Eric Ulrich (R-Ozone Park) was among the dissenters.

“While I understand the health concerns that prompted the introduction of this bill, it is nothing more than another example of government intruding into the private lives of New Yorkers,” Ulrich said in a statement after the vote. “Whether we like it or not smokers pay taxes and they have rights too. We need to be mindful of the fact that we’re infringing on the rights and freedoms of everyday residents who are not breaking the law.”

Along with possibly infringing on rights, the law seems difficult to enforce—it’s not a police matter. The smoking ban will be enforced by Parks Department Enforcement Police, which works well at the beach but becomes problematic in public squares and pedestrian places where the Parks Department doesn’t patrol.

Nevertheless, Bloomberg expressed optimism about the impact of this bill.

The mayor also signed three other bills into law, all aiming to increase road safety. Two bills require the Department of Transportation (DOT) and the police to post vehicle and bi- cycle accident information, while the fourth requires the DOT, upon request, to provide City Council and Community Boards with an explanation when a request for a traffic signal or multiway stop sign was denied.

The police will be required to publish information relating to traffic crashes, traffic-related fatalities and injuries and moving violations issued. The DOT will be required to update its pedestrian safety report every five years and publish bicycle related accidents.

The city only recently began keeping statistics on bicycle related traffic accidents; the first round of data will be published late this year. With mandatory traffic info published online by both the DOT and police, city officials are trying to increase transparency in the city’s transportation network.
Posted by The Forum Newsgroup at 11:21 AM