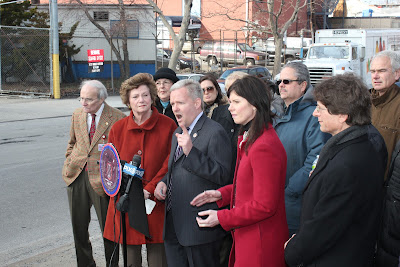 Residents of Maspeth, led by Councilman Jimmy Van Bramer (D-Sunnyside), gathered at the corner of 49th Street and Galasso Place in west Maspeth on Friday afternoon to tell the Metropolitan Transportation Authority (MTA) and the city to stay away.

Two weeks ago The Forum reported the MTA was looking at the Maspeth site to relocate its Access-a-Ride facility from Greenpoint, Brooklyn. Last week, Van Bramer told The Forum he would battle the plan.

On March 1, Van Bramer and a coalition of local elected officials sent a letter to Mayor Michael Bloomberg, and at the press conference, Van Bramer said his actions “shook up the Mayor’s office.”

“I am outraged. Absolutely outraged and livid that the city of New York would attempt to sneak a depot into Maspeth,” Van Bramer said.

Maspeth residents have been fighting to get commercial traffic off the streets— complaints that were emphasized as truck traffic barreling down 49th Street frequently drowned out speakers at the press conference.

“We’ve all worked together to alleviate the amount of trucks that are currently in Maspeth,” said Councilwoman Elizabeth Crowley (D-Middle Village). “Enough is enough. Maspeth is not a doormat.”

“This is not a NIMBY issue,” said Assemblywoman Marge Markey (D-Maspeth). “We already have two depots in our community. We’ve had our fair share.”

Gary Giordano, chair of Community Board 5, noted the Grand Avenue facility is within walking distance of the proposed site. Calling it an “unwise” decision, Giordano said Maspeth already feels too much pressure from commercial traffic.

Residents and Van Bramer stressed they understood Greenpoint residents’ fight for a park. “But I wish the city of New York and the Parks Department paid as much attention to adding green space in Queens,” Van Bramer said.

The fight against the new depot comes as local officials and community groups have been pushing for the city to purchase the former St. Saviour’s church site at 57th Road and 58th Street.
“We’re trying to get a park, but the city doesn’t have money for that. Yet in the meantime, they can find money to mitigate this site,” said Roe Daraio, president of Communities of Maspeth and Elmhurst Together (COMET).

Van Bramer said the proposed depot site is polluted and would cost millions to be remediated.
City officials said they are working with the MTA to relocate the Greenpoint depot, and the Maspeth site is being explored. But nothing is final, officials said.

Van Bramer said the Mayor’s office told him, “Don’t worry, this is like the bottom of the first inning in the process.”

“But there are some ideas and some proposals that are so bad they shouldn’t even take the mound,” Van Bramer responded. “This should have never reached the bottom of the first.”
Posted by The Forum Newsgroup at 10:33 AM