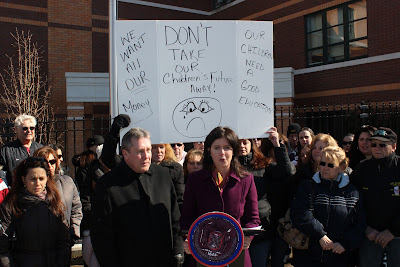 As budget cuts continue to endanger schools, the city Department of Education (DOE) has found a way to make some extra cash—take it from individual schools’ reserve accounts.

Since 2007, principals have been allowed to save money and roll it into the following year’s budget. The DOE now wants to take 50 percent of those funds away under the “Deferred Program Planning Initiative” (DPPI).

“The principal is smart and saved for a rainy day, and now they are being punished,” Matthew Tymus, a parent of two children at P.S. 128 in Middle Village, said.

Tymus grew up in Middle Village, and said he stayed in the neighborhood because of the quality of P.S. 128 and its teachers. He’s worried that good teachers will have to be fired and the school will suffer.

Critics of the program said fiscally responsible principals are being punished. Smart principals saved money because they understood hard budget cuts would be needed, Dromm said.

“We’ve known for two years this fiscal crisis was coming. Why is [Schools Chancellor Cathie Black] punishing the people who did the right thing?” Dromm said.

Another point of contention was the manner in which the plan was presented to principals. The DPPI was mentioned to principals in Chancellor Cathie Black’s weekly e-mail to principals on February 16—with a March 4 deadline.

“Why was this slid under the radar, prior to our spring break, when nobody could react to this?” said Caroline Lee, a parent and PTA member.

At the press conference, Crowley announced the deadline has been pushed back to March 18 and promised to continue fighting until the program is abandoned.

A school like P.S. 128—currently expanding to eighth grade—would be especially harmed by DPPI. Taking away any money from the school would cripple P.S. 128 during the expansion, parents said. On top of that, P.S. 128 does not receive any federal Title I money, so its budget is tighter than most schools. Crowley said this forced P.S. 128 and similar schools throughout the city to save, and that the money should stay in the schools.

“The DPPI has allowed our schools to be fiscally responsible and ensures that money meant for our local schools, stays in our local schools. For the DOE to tap into schools’ budget funds and blame budget deficits is disingenuous,” Crowley said.

Under DPPI, principals are faced with spending all their reserves—even if it isn’t needed—or surrender half of their money to the DOE.

One principal told GothamSchools, an independent non-profit news organization covering city schools, that with a mid-April deadline to make most purchases, the DOE is inviting a shopping spree. “The likely result is that approximately $80 to 100 million that could have been used by schools to preserve teaching positions, extracurricular activities, and supplementary academic programs next year will instead be spent on laptop carts and copy paper,” the principal said.

The backlash prompted the DOE on Monday to revise its plans to take only 30 percent of school funds rather than 50 percent. In a statement, Black said, “I heard thoughtful feedback from principals across the five boroughs about how we can help them continue making prudent, long-term budget decisions, and we’ve crafted a solution to let them do that.”