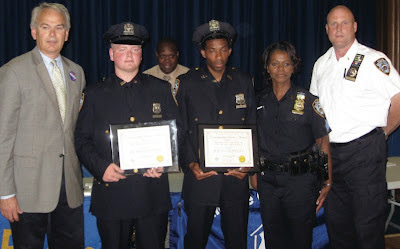 Lt. Jerry Lester told the audience that he recently joined the Ridgewood-based precinct after serving for years in various Brooklyn neighborhoods. He was raised in Woodside and spent lots of time as a child hanging out around 83rd Street and Eliot Avenue in Middle Village, where his mother lived. “I still have memories of hanging out in the common driveways,” he said. “It’s a great neighborhood and is a special part of my heart.”

Monthly Crime Report
The lieutenant reported that 19 major crimes occurred in the sector covering Juniper Park and the surrounding area between May 26 and June 26. Those incidents included eight reports of grand larceny, mainly involving credit card theft, which he called a “major problem” that is “increasing every year.” There were also three reports of auto thefts. Lt. Lester noted that Dodge Caravans and Plymouth Voyagers have become common targets. There were also three homicides during that time stemming from the Father’s Day fire in a Metropolitan Avenue apartment, said Lt. Lester.

Between May 26 and June 26, there were 52 arrests within the area surrounding the park, according to Lt. Lester. “They’re doing a great job out there and a lot of good work,” he said of the precinct’s beat officers. 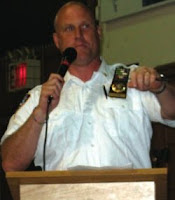 Don’t Become a Target
Lt. Lester reminded residents to double check that all windows and doors are locked when leaving the house. “You won’t believe the amount of people who forget to lock everything up, go away, and then come back to find their house ransacked,” he said. He also urged parents to remind teenagers to be careful when talking on their cell phones on the streets, as it can make them an easy target. “They’re not paying attention to their surroundings, and the perps come up and steal the phones,” he said. Six suspects from Brooklyn were recently arrested for stealing a cell phone in Ridgewood, he added.

There have also been several recent incidents of car break-ins, especially vehicles that have marks on the windshield from suction cups, which tells the perps that there might be a GPS system or radar detector inside. “The suction cups on the window show the perps it’s inside,” said Lt. Lester. “Take it in and lock it up.”

Cop of the Month
Two of the precinct’s officers were honored by the civic association for helping take into custody a suspect in a home invasion in Middle Village last month. At 11:05 p.m. on June 17 police received a 911 call reporting a robbery in progress at 84-42 63rd Road. Two black men pulled out a gun, forced three family members into the house and ordered the victims to hand over their valuables, according to police.

Officers arrived at the scene as the two men were fleeing the scene, one on foot and other in a white Jeep. A patrol car spotted the vehicle on Dry Harbor Road near Juniper Valley Park a short while later, just as the suspect lost control and crashed into a utility pole at 64th Road. The suspect ran from the vehicle as officers Collin Wynter and Robert Sowden gave chase, and was eventually arrested after officers found him hiding in a common driveway at 79th Street and Furmanville Avenue.

In recognition of their efforts, Wynter and Sowden received the JPCA’s Community Recognition Award. “We don’t give many of these out,” said Robert Holden, civic president. “Home invasions rarely happen, but when they do it is nice to know that the precinct responds. They weren’t thinking of themselves.”

“It was a great response, and they put their life in danger,” added Lt. Lester. “It’s a tough job, but it’s a great job.”

The incident marked the second home invasion to occur in Middle Village in the past two months, prompting some questions from concerned residents. In April, a man renting an apartment on 70th Street shot and killed a man who robbed him at gun-point. The tenant was arrested and is still in jail because the gun used in the shooting is illegal, according to police, who found a small amount of drugs inside the apartment.

Lt. Lester told the residents that the most recent incident appears to be random, while the victims April home invasion were likely targeted. “The so-called victim and the guy shot were both up to no good,” he said. The precinct’s detective squad is still investigating both incidents, as two men got away after the April robbery, and one is still at large from last month’s incident.

Unanswered Phone Calls
Resident Augie Trinchese said he has encountered several incidents of phone calls to the precinct going unanswered. “There are a lot of thing that happen that are not 911 situations that you call the precinct for,” he said. “My personal experience is that the phone doesn’t get answered. I know you’re busy, but my recent experience is that no one is there to answer.” Lt. Lester responded that there is somebody on duty around the clock to answer the phone. There are times when that person gets tied up on another call, but he agreed that “endless ringing is ridiculous.”


The JPCA honors Officers Robert Sowden and Collin Wynter for arresting a suspect in a June 17 home invasion. At right is Lt. Jerry Lester and in the background (center) is Community Affairs Officer Tommy Bell.
Posted by The Forum Newsgroup at 4:21 AM