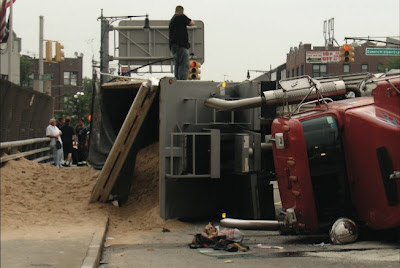 MASPETH – In light of an accident last week that could have turned deadly, local officials are renewing their demands that the city take steps to reduce the amount of truck traffic along Grand Avenue.

A truck hauling sand overturned as it was turning from the westbound Long Island Expressway service road onto Grand Avenue at about 8 a.m. last Thursday, according to witnesses. The truck overturned on the Grand Avenue bridge, spilling sand onto the expressway below. The accident forced the closure of the highway’s westbound lanes and caused major traffic backups on local roads.

The truck was removed from the roadway by and the driver was taken to a local hospital and is believed to be the only person injured in the accident. Firefighters used long poles to search through the sand, which was piled six feet high on the sidewalk, to make sure nobody was trapped.

“If somebody had been walking [on the sidewalk], they would have been killed,” said Robert Holden, president of the Juniper Park Civic Association. “Every day, we have trucks barreling through Grand Avenue.” 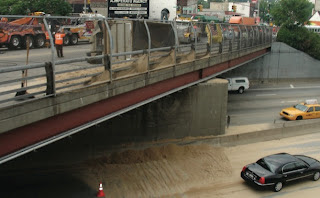 For years, residents and local groups including the JPCA have urged the city Department of Transportation to reduce the amount of truck drivers cutting through the neighborhood’s main commercial area as they head east to the Long Island Expressway. In 2004, Tony Nunziato, then chairman of Community Board 5’s Environmental Committee, and the late Frank Principe, then CB 5’s chairman, devised the Grand Avenue Truck Bypass Plan.

The plan called for rerouting tens of thousands of trucks away from the heart of Maspeth and through the neighborhood’s industrial sections. Trucks traveling east from Brooklyn would be forced to turn onto Rust Street from Grand Avenue and drive north,entering the eastbound Long Island Expressway at Maurice and Borden avenues. Trucks traveling west on the LIE to Brooklyn would not be allowed to exit the highway at 69th Street and Grand Avenue, expect for local deliveries. Those vehicles would instead exit at Maurice Avenue.

The plan was approved in 2005 by then DOT Commissioner Iris Weinshall, but has yet to be put in place because the DOT determined that the intersection of Maurice and Maspeth avenues must first be reconfigured. “We did all the homework, and the city just had to give the nod,” said Nunziato, who owns a business along Grand Avenue.

Nunziato and others are now calling for the DOT to take immediate action. “They need to get moving and make this a priority before something devastating occurs,” he said. “If the Grand Avenue Truck Bypass Plan had been in place, this accident very likely would not have happened. This could have been very tragic [and] should serve as a wakeup

Local civic leaders are not the only ones calling for the city to address the issue of trucks on Grand Avenue. In a May 12 letter to Community Board 5, Sister Rose Torma, principal of St. Stanislaus Kosta School argued that “truck traffic moving both east and west on Grand Avenue between 64th and 61st streets must be rerouted.”

Her letter, which was in response to a separate DOT initiative designed to make the walk to school safer for students, said that “trucks and buses starting up after the light turns green causes an increase of both noise and air pollution, which goes into the opened classroom windows located directly opposite the traffic.”

On Wednesday, a DOT spokesman said that the department is currently “pursuing an engineering study to determine what kind of work would be necessary to support redirecting trucks of Grand Avenue.” The spokesman declined to provide a timeline for the project. “We’re looking at where else the trucks would go, and what type of infrastructure work would be need on those streets,” the spokesman said.
Posted by The Forum Newsgroup at 7:00 AM