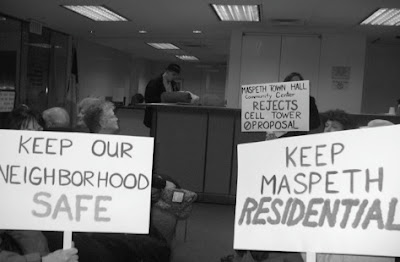 Despite overwhelming opposition from residents, elected officials and the local community board, the city has granted a cellular company permission to place a tower on top of a house on 72nd Place in Maspeth.

At its meeting this past Tuesday, the Board of Standards and Appeals, which rules on applications requiring a variance from the city’s building code, voted 4-0 to allow Omnipoint Communications to place the cellular tower on top of a house at 53-20 72nd Place.

The decision immediately garnered strong backlash from neighbors and community leaders who fought the proposal since it was announced late last year. Under the agreement, property owner Joseph Wroblewski - whose family owns Frank’s Deli next door to the proposed site - will receive an undisclosed amount in rent for allowing the company to place the antenna on top of the house.

Many now fear that this ruling sets a dangerous precedent that could allow cellular companies to easily obtain the necessary variances and permits. That could mean a greater number of towers within residential areas as companies seek to improve their coverage, especially inside homes as people rely more on cell phones over landlines.

The proposal originally called for a 25-foot tower on top of the house, rising a total of 54 feet above street level. As a result of community opposition, the company scaled back its proposal to a 19-foot tower that will rise 45 feet above street level. The diameter of the antenna, which will be disgusted as a flagpole with an American flag at the top, has been reduced from 36 inches to 32 inches.

Maspeth resident Manny Caruana fears that quiet residential neighborhoods such as this are being destroyed by greedy developers and companies. “Quite honestly it seems like we no longer have control over our own neighborhoods,” he said. “They can just come in and do what they want... Our quality of life doesn’t mean a damn thing and our investment in the community and in our homes doesn’t seem to matter.”

Caruana said he is concerned that the decision will mean other cellular companies will come in and offer homeowners “big bucks” to allow cellular towers on their homes. He noted that Wroblewski lives on Long Island and rents out the house where the tower will be placed. “Quite obviously, he bought this house to make money and doesn’t care about the community,” he said. “Anybody who does certainly wouldn’t do this.”

Wroblewski initially said he tried to back out of the contract after neighbors objected, but was not able to. He refused to say how much rent he will receive from Omnipoint, and has stopped speaking with the media about the matter.

For Caruana, that public hearings were held during the day in Manhattan only adds insult to injury. “Had these hearings been held in the area affected, you would have had thousands of people there and it might have been a different outcome,” he said. “It is held in Manhattan, with Manhattan people making decisions for Queens. We should have another venue to challenge this decision. It leaves absolutely no recourse.”

He is not the only resident angry over the vote. Diane DeSilvia, a 72nd Place resident who helped organize opposition to the application, called the decision “outrageous” and said it “could allow cell companies to invade residential areas everywhere with structures that do not belong where people live.”

Gary Giordano, district manager of Community Board 5 – which overwhelmingly rejected the proposal – agreed that this could set a bad precedent. “I would say there is certainly a possibility [that wireless companies will have an easier time gaining variances] but hopefully they would have to do a very good job proving there is a lack of service in that area,” he said. “I don’t like it at all.”

In a statement, Assemblywoman Marge Markey (D-Maspeth) said she is “angry” over the board’s decision.

In the meantime, residents such as Caruana are left wondering about the rational behind the board’s decision, and what the next step is. “I was very hopeful they were going to disapprove this tower,” he said. “It is in the middle of a bunch of one-and-two-family homes... I don’t know if there are any other steps we can take, but we will be looking into it.”
Posted by The Forum Newsgroup at 10:45 AM