A Special Night for Local Athletes 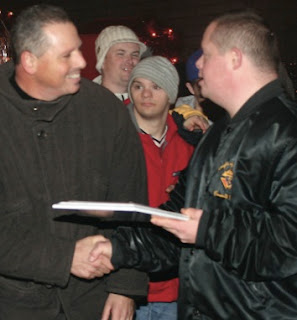 This past Monday night Christmas came a little early to a group of Special Olympian athletes and their families when Santa paid an early visit to the small community of Neponsit in Rockaway.

The athletes were hosted by the president of the Brooklyn/Queens chapter of the Juvenile Diabetes Research Foundation (JDRF), Joe Mure, and his family at their home on 144th Street and Neponsit Avenue. According to Joe Featherston, founder of the Rockaway Beach Special Olympics team at St. Camillus, Mure is as much like the real Santa Claus as anyone will see.

Every year Mure holds a cocktail party before Christmas to raise funds for JDRF and also hosts a holiday lighting event at his home, complete with headline entertainment and free food for thousands of spectators who have been showing up for more than ten years to view the extravaganza.

But this year he wanted to extend the network of his generosity and so he reached out to Joe Featherston. Mure was very persistent about bringing the athletes down to see the lights, enjoy some food and get presents from Santa. “Joe came to us over the summer,” said Featherston, “we never had to ask him.”

Then Featherston says Mure kept calling. “So ya commin’”? Over and over Mure called and made sure arrangements were in order to bring the athletes out for a special Christmas treat.

“Joe Mure is phenomenal,” said Featherston, “ and if you look around you, it’s easy to see what his gestures mean to these people and their families.” The people that Featherston refers to are a group of about 50 special athletes with cognitive disabilities that range in age from 8 to 60-years-old.

Featherston started the program about 12 years ago after having coached special athletes at Cardozza High School and the Cross Island Y. He started thinking he’d like to bring a program like this nearer to his home where even more athletes could have access to programs.

Joe Featherston approached one of the members from his own Rockaway community whose son has a cognitive disability. Paul Fitzpatrick’s mom, Regina, responded to the query ,“Do you think people would come to this type of a program in Rockaway?” She answered Joe Featherston’s big question with just one word, “absolutely.”

Regina’s 25-year-old son, Paul, has been involved since the program began 12 years ago in the gymnasium at St. Camillus. They meet every Monday night September through June from 6:30-8 PM. According to his mother, Paul Fitzpatrick missed only one of those meetings in the last twelve years -- his dad took him skiing in Colorado. “He really didn’t want to go because he didn’t want to miss Monday night at the program. I don’t think he’d ever miss again,” Fitzpatrick said with a big smile.

The Rockaway Beach Special Athletes program is open to special athletes of all ages and has athletes from Howard Beach, South Ozone Park and Rockaway in addition to groups that come from Brooklyn. The program began with five athletes and has blossomed to include more than 50.

The program provides sports training and athletic competition for all children and adults with cognitive disabilities. Weekly training is provided each week in physical fitness, basketball, soccer, softball, football, track, floor hockey, volleyball and board games for 54 athletes. The group has a full volunteer staff including about 10 seniors and 30 kids who are in 8-12th grades. Funds to support the athletes are raised within the community, primarily in conjunction with the Wounded Warriors visit to Rockaway every summer, when host Flip Mullen has a block party to support the athletes.

The weekly program allows these special athletes to develop fitness, experience joy, and participate in the sharing of friendship with other special athletes within their community. In addition, the program sponsors three annual weekend trips. Over 20 athletes travel to Upstate, NY to the Adaptive Sports Foundation at Windham Mountain both in the winter and summer. Shake-A-Leg in Miami, Florida is the site of our November trip. Two NY universities host competitive sporting events for the athletes throughout the year. A track and field competition is held at St. John’s University in Queens and Fordham University in the Bronx hosts basketball. Dozens of athletes compete at the events.

But on Monday night, there were no sports and no competitions. There were just smiles, hugs, and lots of lights, Santa Claus and gifts for everyone. Oh, and then there was Joe Mure—the other Santa. “If you want to know what Christmas means,” Mure said, “just look at their faces. Now that’s a Merry Christmas.”
Posted by The Forum Newsgroup at 10:25 AM