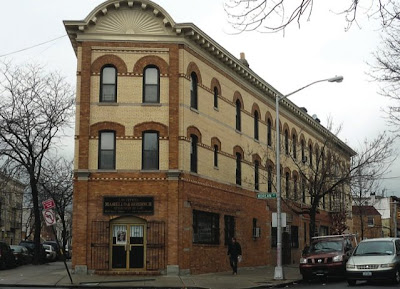 A push to have a small area of Ridgewood designated as a historic district cleared a hurdle this week when a public hearing was held before the Landmark Preservation Commission.

Local preservationists and elected officials are seeking to have the nearly four-block area, which features 91 buildings known as Mathews Flats, given landmark status to preserve it from major alternations. The blocks feature rows of the spacious flats, which became a nationwide model for providing housing for working-class immigrants in the early 20th century.

The three-story, six-apartment buildings were constructed between 1908 and 1911 by German developer Gustave X. Mathews, and included on the National Register of Historic Places in 1983. The area being considered for landmark status is bounded by Forest Avenue, Woodbine Street, Fairview Avenue and Linden Street. A city report on the Mathews flats emphasizes significant details of the Renaissance and Romanesque Revival style buildings, including their brickwork and metal cornices. 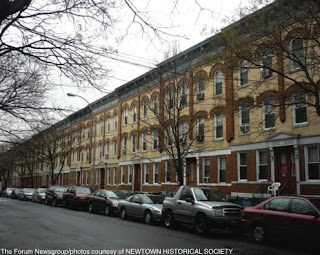 “I think that Ridgewood has beautiful homes, side streets and business districts that need to be preserved,” said Crowley (D-Glendale), who holds a degree in city planning. “It is interesting that these buildings were built for new Americans, and still serve that purpose today... It’s a look and feel that I don’t think we can afford to lose.”

Crowley, who will begin representing the area on January 1 after defeating incumbent Anthony Como (R-Middle Village) in November, said there are other areas of Ridgewood that she would like to see considered for landmark status once this process is complete. The LPC expects to vote on this proposal once the new fiscal year starts on July 1, 2009, after which the plan moves to City Council for final approval.

In 2000, the city granted landmark status to a one-block section of Ridgewood on Stockholm Street between Onderdonk and Woodward avenues.

Among those testifying at the hearing was a representative from the Historic Districts Council, which is a citywide advocate for New York’s historic neighborhoods. In a statement, the council explained that the “history of Ridgewood is important for understanding the shape of our city.”

“The distinctive visual continuity of the Kreischer bricks and consistent scale, coupled with modest, though distinctive, architectural details creates a stable, welcoming environment well-suited for populations looking to physically establish their own enclaves,” the HDC wrote. “The humane touches and human scale further reinforce the importance of the street as a part of daily life.”

The only objection the HDC raised was the relatively small area being considered for designation, since almost 3,000 similar units were built in the area. “The remarkably intact buildings have a grace and a rhythm which only grows as you begin to understand the vast number of them,” the group argued, noting that the area constitutes one of the largest collection of National Register listed properties in New York State.”

The HDC argued that “a cherry-picked few blocks selected for preservation just doesn’t make sense [and] doesn’t reflect the importance of the
development or even its reality.”

The housing units were held in such high regard at the time of their construction that they were featured at the 1915 Panama-Pacific International Exposition in San Francisco as a way to provide affordable clean living conditions for immigrant workers.

Also testifying on behalf of the proposal on Tuesday were Paul Kerzner of the Greater Ridgewood Restoration Corp, Theodore Renz of the Myrtle Avenue Business Improvement District and a representative from the NY Landmarks Conservancy. In addition, Councilwoman Diana Reyna (D-Williamsburg), who represents a portion of Ridgewood, sent a letter in support of the proposal. Nobody spoke in opposition.
Posted by The Forum Newsgroup at 10:30 AM