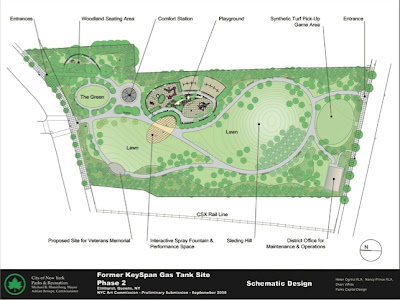 A presentation on the city’s new park at the former Elmhurst Gas Tanks property highlighted this month’s Community Board 5 meeting last Wednesday in Ridgewood.

Several other topics, including parking restrictions along Gates Avenue and the closing of a nearby firehouse during overnight hours were discussed at the board’s holiday gathering in the Greater Ridgewood Youth Council on Myrtle Avenue.

Representatives from the city Parks Department provided board members and residents with an update of progress on a park being created at the site of the former Elmhurst Gas Tanks property at 79th Street and Grand Avenue. 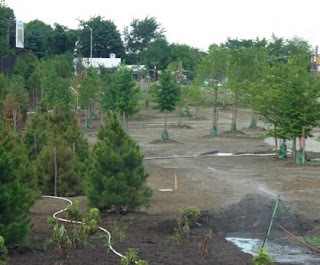 During the project’s $8.25 million first phase, the park’s footprint was established and the landscaping was installed as hundreds of trees, several large boulders and tons of clean fill was brought to the six-acre site. The Parks Department is now looking ahead to phase two, which is currently in the design phase. A rendering created by the department calls for a playground, comfort station, lawn areas, ballfields and a Vietnam War memorial.

Construction on phase two is expected to begin next fall and be completed by winter 2010. The total project cost is expected to be about $20 million, much of which was funded by mayoral and City Council allocations, according to the Parks Department.

The site is being developed as a “passive park,” meaning it won’t have soccer or baseball fields. However, it will include an artificial turf field that can be used for informal pickup games. In addition, tons of fill have been brought in to create contours on the site, which previously was flat.

For local residents and civic leaders, the park taking shape has been a long time coming. The effort started more than a decade ago, when energy company Keyspan began dismantling the gas tanks in 1996. In 2001, it announced plans to sell the property for development of a big box retail store such as a Home Depot.

At that point, members of local groups such as the Juniper Park Civic Association worked with elected officials including former Councilman Dennis Gallagher (R-Middle Village) and Assemblywoman Marge Markey (D-Maspeth) to prevent a Home Depot from being built at the site. In 2005, Keyspan sold the property to the city for one dollar, paving the way for a much needed park to be built there.

The hall, which has been in the neighborhood since 1924, is facing a declining customer base, said Klun, in part because it is difficult for patrons - especially seniors - to find parking. As a result, the hall, located on Fairview Avenue, is asking the board to allow parking along both sides of Gates Avenue between Seneca and Grandview avenues to help the parking situation.

“It would not interfere with rush hour [traffic] and will help alleviate” the parking situation, Klun told the board. “People will be more likely to patronize the businesses and restaurants in the area... Business has declined to a degree.”

Board Chairman Vincent Arcuri noted that the parking restrictions were put in place years ago at the request of the board due to several accidents and to accommodate buses. He said the board’s Transportation Committee will discuss the request in January. “We will probably have to look at how many buses frequent the route, and how many at night,” he said.

Arcuri said he is concerned about the city’s plan to close the Himrod Street fire station just across the Brooklyn boundary that houses Engine Company 271.

That station is “two doors away from the Queens border” and is the first responder to Wyckoff Heights Hospital, according to Arcuri. It is one of five that will be shut during overnight hours starting January 17 to save the city $8.9 million.

Arcuri asked Gary Giordano, board district manager, to send the mayor a letter arguing that it would “not be prudent” to shut the station overnight since it would impact the area within Community Board 5.

“The statistics are there, but the logic is crazy,” said Arcuri of the motivation behind the decision. “Abandoning southwest Queens at night and a major hospital is wrong.”

Board member Brian Dooley gave an update on the Environmental Committee, which recently held its first meeting “in a long time.”

The group has three main goals and functions, said Dooley. First, it intends to “pick up where the flood mitigation task force left off” and continue to examine the problem of flooding in certain neighborhoods. Second, it will keep abreast of several environmental cleanups taking place at properties throughout CB 5. Third, it will look into ways the board can “go more green” through various projects.

“We are at the very beginning of this environmental committee... but I think we will get a lot of support on it,” said Dooley.

Dooley also provided a quick update on several roads projects. The water and sewer replacement project is underway along Maurice and 54th avenues in Maspeth, with the next phase expected to take place at night. However, the plan to reconstruct streets in south Middle Village has been “scaled back” and “pushed back a couple of years.”

Walter Sanchez, chair of the board’s Land Use Committee, updated members on several local projects. He said the committee is scheduled to meet in January with Queens Director of City Planning John Young regarding the stalled down-zoning effort.

Tom Smith from city planning told the board that the department is “putting the final touches on what it’s going to present” to the committee. “We want it to be finished so we can take your input back,” he said.

Sanchez also gave a quick update on the proposal to place a cellular tower on top of a 72nd Place house in Maspeth and the city’s plan to build a 1,000-seat school at 74th Street and Grand Avenue in Maspeth (see related stories in this issue).
Posted by The Forum Newsgroup at 10:40 AM