All Kidding Aside: Ulrich Wins Big 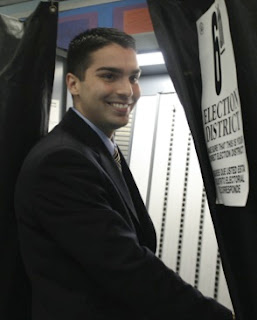 An electrified crowd of hundreds of supporters greeted City Councilman–elect Eric Ulrich, winner of the much talked-about special election in the 32nd Council district, as he made his way through the entrance of his victory party at Villa Russo on Tuesday evening. “When I walked through the door, I just couldn’t believe all those people had shown up.”

“I don’t know who is paying for all this food, but this is some party,” Ulrich joked with the exuberant audience. But there was something beside humor and happiness that contributed to the infectious mood throughout the room. It was an unmistakable sense of pride and accomplishment shared by all those in the room.

Before he actually took to the podium, Ulrich made several stops in the crowd to thank some special people. But one in particular got the biggest greeting from the second youngest member ever to be elected to the New York City Council—his grandmother Rosemary. “I was born to a single mother and my grandmother has been a major part of my upbringing. I thank her for her constant support and love. I would not be here without her or the rest of my family.”

Ulrich, who is well known for singing the praises of grandma's baking skills, couldn’t resist the opportunity to tell the crowd that Rosemary had personally baked cookies for all the polling sites.

Ulrich spent the special Election Day visiting poll sites from Rockaway to Ozone Park. On Tuesday afternoon he told The Forum, “I think we’re going to win it. I think there is tremendous support for my candidacy on the peninsula as well as the mainland. It’s a great feeling to have many of the Rockaway seniors whispering in my ear, ‘Hey Eric, we’re voting for you.’ When asked how he would best describe his feelings about the day, Ulrich thought a moment and said, “I am truly humbled.” And the humility carried through to the first statements Ulrich made to his soon-to-beconstituency.

“We all got to this victory together,” Ulrich began. “It’s been hard because of everything that happened in this election. People write you off and they say a lot of things. They talked about my inexperience and they said I was a kid. Well tonight I am the comeback kid.” After a thunderous round of applause, Ulrich added one more promise to his loyalists. “I have my foot in the door and they’re gonna have to pry me out of it.”

Before concluding his remarks the new Councilman to be thanked one more special person, his fiancé Yadira. The couple met at St. Francis College and plan to be married in November. “I promised her that if I won I would go get measured for a tuxedo.”

After receiving a call from Council Speaker Christine Quinn, Eric will spend his first day at City Hall on Thursday. According to campaign sources, the election commissioners will meet next week and the date for a swearing in ceremony will be announced.
Posted by The Forum Newsgroup at 12:10 PM