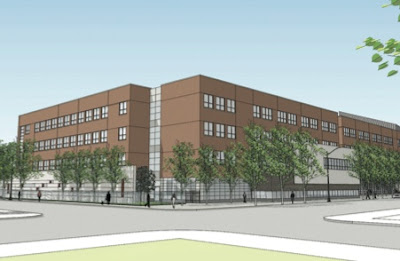 The debate over whether the city should build an 1,100-seat high school on the former Restaurant Depot property in Maspeth will rage on for at least another month.

This week, a City Council land use subcommittee agreed to delay a hearing on the proposal for thirty days at the urging of Councilwoman Elizabeth Crowley. That gives the community more time to iron out several issues before the city seeks approval to build the facility on land at 57th Avenue and 74th Street.

Meanwhile, the city’s attempt to buy the property is moving forward on a parallel track, according to William Havemann, spokesman for the Department of Education. As reported in last week’s Forum West, a meeting is scheduled for 4 p.m. today (Thursday, February 26) in PS 58 on Grand Avenue regarding the city’s possible use of eminent domain to acquire the land from owner Lucky Star Elmhurst LLC.

“The process for getting the school site and the proposal approved by the City Council is slightly different than the actual process of acquiring the site,” explained Havemann. “So far, we have not been able to reach an agreement with the property owner, so we’re laying the groundwork to use eminent domain to acquire the site if needed.”

He said the department has had “ongoing communications” with Lucky Star Elmhurst, which purchased the industrially-zoned property for $12.6 million in 2006, but declined to characterize the discussions.

However, Councilwoman Crowley said her support for the project hinges on whether the DOE will guarantee that it will serve local children. “My stance on the school has never changed,” she said during an interview on Monday. “We need to make sure it is primarily for locals.”

Crowley said that a recent meeting with the office of Schools Chancellor Joel Klein “did not go very well” due to her stance that she will not support the project “if [DOE] can’t guarantee those seats are for our community.”

While it is rare that a councilmember wouldn’t support a school project in their district, Crowley vowed to take that step if the project isn’t going to serve local children. “We have to come to some kind of consensus if it is built. I hope we do because I think there is a need for more seats.”

The DOE, however, has a citywide policy against giving high schools local zoning, and instead prefers to leave them open to students around the city – especially as many are themed schools that have a specific focus.

“We believe very strongly on choice at the high school level,” said Havemann. “I don’t want to take anything off the table, but I do want to say that we’ve never done it in the past and it is bad policy.”

However, the DOE also has “not taken off the table the idea of giving priority to students within the district,” said Havemann, adding that there is a “subtle but important difference” between the two classifications. Under the current plan, priority would be given to all Queens students, with any remaining open seats being offered to students citywide. However, the DOE will consider giving that priority to District 24 students first, said Havemann.

The new school is scheduled to open in the fall of 2012. The original proposal – which was overwhelmingly rejected by Community Board 5 – called for 1,650 seats serving both intermediate and high school students. The DOE later came back to the community with the current proposal, which includes 1,000 high school seats divided into two smaller schools along with an additional 100 seats for special education students.

Even if priority is given to District 24 students, there remains a segment of residents who argue that this site is not appropriate for a school. Robert Holden, president of the Juniper Park Civic Association, noted that there already are two schools within three blocks of the proposed site and fears the area will become oversaturated with youngsters. He also is weary of any promises the DOE makes in order to win community support for the school.

Holden has also expressed concern at public meetings that the amount of seats will actually be closer to the 1,650 originally planned for once the building is completed. He pointed out that the city’s public notice advertising public meetings on the issue refer to the project as having “approximately” 1,100 seats.

According to Havemann, the proposal will go back before the City Council land use subcommittee in about thirty days. If it is approved at that point, it will go to the full City Council membership for final approval. “If it is approved we then move ahead, either with eminent domain or if we can reach an agreement with the property owner.”

Recognizing that the area’s councilmember is currently not on board with the project, Havemann conceded, “I think it would be fair to say that usually a proposal will go forward only with approval of the local councilperson… Our priority is to make sure this district gets another high school, as District 24 is one of the most overcrowded in the city. We hope we can work with the councilwoman to get this done.”
Posted by The Forum Newsgroup at 12:00 PM