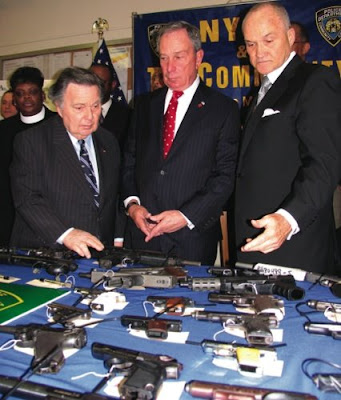 The recent gun buyback program held by Queens District Attorney Richard Brown and the NYPD collected a record 919 weapons at sites throughout south Queens and the Rockaway Peninsula.

“Our one-day gun buyback effort has proven to be a huge success – far exceeding our expectations – by taking more than 900 weapons out of circulation,” said Brown. “I think it is fair to say that the citizens of Queens County are safer today as a result.”

The buyback program was held last weekend at six churches in Jamaica, Laurelton, Saint Albans and Far Rockaway. Individuals in possession of illegal or unwanted guns were allowed to anonymously trade them in for a $200 bank card, while functional BB guns and air pistols were exchanged for $20bank cards. The cards can be used as a debit card or to withdraw money at any ATM.

“Six churches in St. Albans, Jamaica and the Rockaways helped us collect 919 guns – the most ever collected since we began our buyback program,” said Mayor Michael Bloomberg, who said the total number of guns collected citywide through buyback programs has reached 3,500. “That’s 3,500 guns that won’t end up on our streets in the hands of criminals, won’t be involved in tragic household accidents or crimes, and won’t ever be pointed at police officers or civilians.”

According to NYPD Commissioner Raymond Kelly, the city has collected an additional 5,000 guns over the past seven years through its program of offering $100, no questions asked, to individuals who return guns to any precinct stationhouse in the city.

“Our partnership with the city’s clergy and their congregations has worked miracles,” said Kelly. “That’s 5,000 guns [collected at stationhouses] over seven years. But over the course of just six Saturdays, we have recovered over 3,000 guns by having them turned in at houses of worship and by doubling the reward to $200 with matching contributions from our district attorneys. It is a life saving program.”

Added Brown: “The Queens gun buyback initiative is another example of the partnership that exists in this city between police, prosecutor and the communities that we serve to improve the quality of life of our residents and to lower the level of violence in the city."
Posted by The Forum Newsgroup at 11:15 AM