Civic Gets Detailed Look at Downzoning 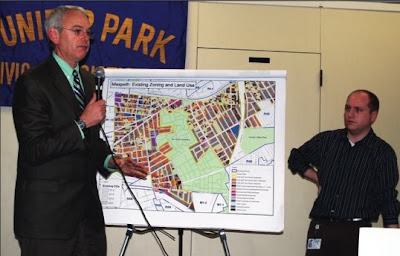 Years after volunteers went door-to-door to survey the neighborhood’s existing character their efforts are starting to pay off, as a new zoning plan might be approved by the end of the summer.

A detailed look at the plan to downzone portions of Maspeth, Middle Village and Glendale highlighted Juniper Park Civic Association’s meeting last Thursday in Our Lady of Hope. The rezoning, which has been underway for three years, is intended to preserve the neighborhoods’ character and prevent out-of-context development.

The plan could be certified by the Department of City Planning (DCP) as soon as April, meaning it would go to the City Council for final approval in late summer or early fall – which can’t come soon enough for residents who have watched as developers destroyed countless blocks with huge projects allowed under the existing zoning.

“Hopefully we will have our neighborhood back from these developers who build big homes,” said JPCA President Robert Holden, who has taken the city to task over the past few years as the downzoning effort languished in the DCP. “We’ve been waiting for three long years.”

City Planning representative Tom Smith walked the roomful of residents and officials through the plan, which covers more than 300 blocks within the three neighborhoods. He explained that the majority of the current R-4 zoning “really allows for a full variety” of housing styles, including one, two and three family units and apartment buildings as tall as four stories.

“The problem is it doesn’t necessarily match up with the existing character,” said Smith. In addition, the R-4 zoning is susceptible to “infill” projects, which allows development of greater density on land surrounded by previously developed parcels. “We went lot by lot, block by block… to really match [the new zoning] to what the building character is.”

The result in the majority of the study area is zoning that allows for one-and-two-family homes as tall as three-stories, according to Smith. The densest type of development would be in R5D districts along Myrtle Avenue and Woodhaven Boulevard allowing three-and four-story buildings with first-floor retail space.

However, about 40 blocks that were included in the study area will not be rezoned under the current plan, said Smith. He said the “vast majority are row homes” in areas that “don’t fit into contextual zones.” Smith described these areas as “stable with very little development.” Since they are already built out, “it wouldn’t make any sense to add to these buildings or to take them down,” said Smith.

Still, Paul Graziano, a certified urban planner who assisted the JPCA with the downzoning effort, said he is concerned that such large swaths of the neighborhood are remaining R-4, which leaves them vulnerable to infill development.

“When you get areas that are rezoning, but have areas that are not rezoned, a lot of the development pressure goes there, even if it is not happening now,” he said in response to Smith’s assertion that the areas left untouched have not been targeted by developers in recent years.

Holden blamed infill development on many of the cases where developers replace a one-family home with a three-family building. “That’s what destroys our neighborhood – no parking, congestion,” he said. “The developers are controlling what’s going on here. We’re going to take this, but we’re going to fight [against] infill.”

Councilwoman Elizabeth Crowley (D-Glendale) vowed to push the project forward and noted that the environmental review process, which takes about six weeks, is underway. “It really affects our quality of life day to day,” said Crowley. “It protects a lot of blocks.”

According to DCP, zoning for the area has remained unchanged since 1961 and this effort comes at the request of the community after portions of Middle Village and Glendale were rezoned in 2006. “The Department of City Planning’s blueprint for the area is intended to respect and reinforce the existing build character,” said a spokeswoman in a statement. “Last week’s meeting was an opportunity for the Department to share our draft proposal and build a consensus.”
Posted by The Forum Newsgroup at 12:30 PM