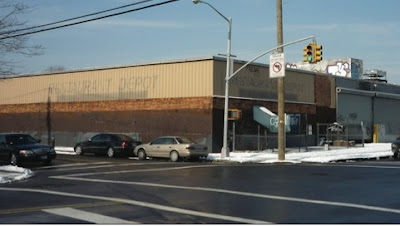 The city might use eminent domain to seize the former Restaurant Depot property in Maspeth to make room for an 1,100-seat high school, despite not yet having City Council approval for the project.

A meeting on the School Construction Authority’s plan to acquire the property at 74th Street and 57th Avenue using eminent domain is scheduled for Thursday, February 26at 4 p.m. in PS 58 on Grand Avenue in Maspeth. The action comes after Community Board 5’s executive committee voted against the project, and before the City Council has even weighed in on it.

News of the upcoming meeting, which was only advertised through a public notice published in the New York Post and City Record instead of in local papers, left Juniper Park Civic Association President Robert Holden furious.

“Nobody knows about it, and that’s how they like it and it’s at 4 p.m. on a Thursday” said Holden, who has opposed the school due to its proposed location. “This is government at its worst. They didn’t even notify the community board. It’s disgusting, the way this administration does as it pleases.”

The city did not notify CB 5 about the upcoming meeting, according to District Manager Gary Giordano. “What constitutes public notice? Unless you buy those publications, you’re not going to see that,” he said. “If you want to be responsible as far as having a hearing when people can attend, you normally do it in the evening.”

SCA attorney Gregory Shaw said on Wednesday that the hearing is scheduled during business hours because “most people are not interested” about whether eminent domain should be used. “The meetings we have at night are about the project. The eminent domain portion is really about taking the property,” he said. “This is a public hearing to discuss if we are going to use eminent domain, and if the City Council approves it, we then make a decision.”

According to Councilwoman Elizabeth Crowley (D-Glendale), the scheduled meeting does not necessarily mean the city is planning to use eminent domain to seize the property. Instead, it is a way for the city to protect itself against property owners who raise the price once it becomes known the city is considering buying the land.

“That eminent domain meeting is part of the city’s projects whenever they want to buy a building,” she said. “They’re saying the owner has no right to inflate the cost because he knows the city is interested. It is to protect fair market value and project our city dollars. They’re letting the owner know that they’re going to get a fair market estimate of the cost and are not going to pay some number out of the sky that the owner says its worth.”

Shaw said that eminent domain is being considered in this case because “the seller appears to be unresponsive to our request.” He said the SCA is not aware of anywhere the property is being advertised for sale. “We’ve gotten indications the owner is willing to sell it.”

However, according to an online listing, the property is being offered for sale by Segal Realty of Manhattan for $15 million. Calls to Josh Segal were not immediately returned.

Giordano said opposition to the school has come for two main reasons: fears the already-congested area will become overrun with thousands of school children, as two other schools already exist within two blocks of the proposed site, and the city’s refusal to promise that it will be locally zoned to ensure that neighborhood children can enroll there.

“They say they don’t zone schools locally for the most part,” he said. “That neighborhood will get all that extra traffic and little of the benefits in terms of teenagers from the local community being able to go there. Those are the main reasons it is not sitting well so to speak.”

Crowley is meeting with Schools Chancellor Joel Klein this week to discuss issues the community has raised with the project. She said she has received a lot of input and letters both for and against the project. “The chancellor needs to realize, and the mayor as well, that if we’re going to burden our community with a high school we need a guarantee that students attending it will be from the community. If that’s not an [option], then the school doesn’t have a chance in my opinion.”

For Holden, the whole process has been business as usual for the Department of Education and SCA. He said an SCA official told him that most new schools are themed schools, which are not zoned locally. “I asked why she didn’t bring this up during the two public hearings before the community board, and she said that nobody asked,” said Holden. “This is consistent with how the DOE operates, keeping things secret.”
Posted by The Forum Newsgroup at 12:45 PM