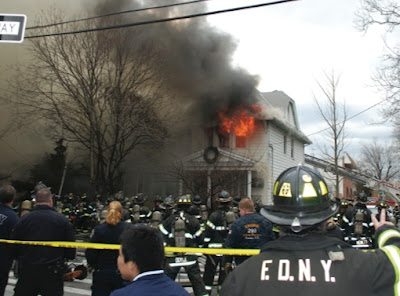 A raging fire engulfed a dozen homes along 96th Street in Woodhaven last week, forcing firefighters to battle heavy smoke and winds for several hours before bringing the blaze under control. 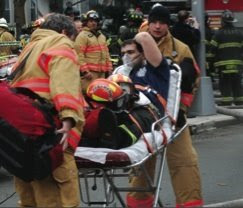 The five-alarm fire, which was reported at 12:30 p.m. last Thursday near 91st Avenue, destroyed 11 houses and damaged a twelfth before it was brought under at 3:30 p.m. It had already spread to several homes by the time units first reached the scene, and 235 firefighters and EMS were eventually called to the scene. Two firefighters and two civilians were treated for minor injuries.

Battalion Chief Sal Cassano said that heavy winds hampered firefighter’s efforts to knock down the fire, which spread between the homes through a shared cockloft in the attic. “Once the fire gets from the top floor into the cockloft, there is no subdivision inside to stop it,” he told reporters at the scene. “It takes off very quickly, and on a windy day like today it takes off even faster… We had heavy smoke initially when we arrived.” 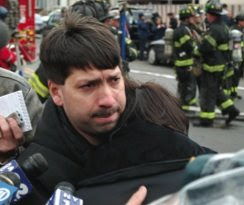 One of the victims, who identified himself as a retired police officer named Mike, tried to console his wife as the couple stood watching their house burn. He said he was able to save the dog but was unable to find the family’s cats inside the smoke-filled house.

“The kids are safe, we’re ok. We worked hard for all this, but we will be fine,” he said, kissing his grief-stricken wife. “It hasn’t set in yet. I’m just still in awe… I smelled smoke inside the house and someone rang the bell and said the house next door is on fire. I grabbed the dog and ran out,” he said.

Fatima Coloa was also able to flee from a nearby house before it became engulfed in flames. “My brother actually called me while I was sleeping,” the teenager said. “There was smoke inside the house. As soon as I ran out, that’s when one of the windows busted out with the fire.”

While FDNY investigators were still working to determine the cause of the fire, neighbors said it may have been started by a person smoking a cigarette. Eleven homes were left uninhabitable, and the city ordered the buildings vacant, leaving residents with just the clothes on their backs and the few items they were able to grab on their way out.

A huge crowd gathered near the intersection of 96th Street and 91st Avenue, about two blocks east of Woodhaven Boulevard, and watched as exhausted firefighters doused the homes in water, which was blown by the wind as it came out of the hoses. Neighbors gave a blanket and coat to one girl who had fled her burning home in just her pajamas, and the Red Cross helped displaced residents find shelter. 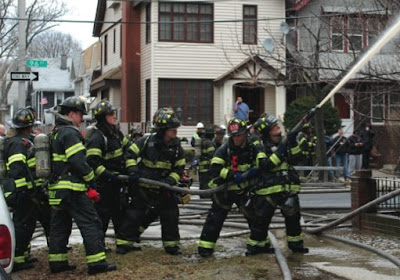 Photos by Conor Greene
Click Here to See Additional Photos From the Scene
Posted by The Forum Newsgroup at 12:18 PM