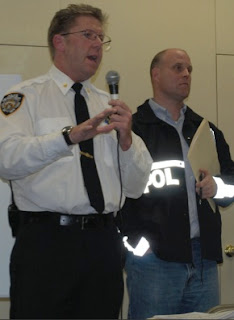 Residents were brought up to date on local crime statistics and incidents by members of the 104th Precinct at last Thursday’s Juniper Park Civic Association meeting in Middle Village.

Deputy Inspector Keith Green, commanding officer at the Ridgewood-based stationhouse, informed residents that major crime decreased by about three percent overall last year. In fact, there were declines in all of the seven major categories except grand larceny, which increased by about 16 percent.

“That covers a lot of different types of theft” and has been on the rise “throughout the city,” according to Green, who noted that much of the increase is due to a rash of thefts of high-end electronics from children who use them while walking down the street. “You need to educate them not to display expensive items,” he said.

Some of those incidents escalate from simple thefts to robberies or assaults involving violence, said Green, who added that many of the victims are as young as nine or ten years old. “They feel the need to hold [the electronics] right in their hands” in full view while in public, he said.

Through the first six weeks of this year crime is down 23 percent overall, said Green. The first homicide of the year occurred last week in Ridgewood, when a landlord was found dead inside his first-floor home on Greene Street. That incident is still being investigated by the 104th Precinct detectives and the Queens Homicide unit and a $2,000 reward for information leading to the suspect’s conviction is currently being offered.

Deputy Inspector Green, who was joined at the meeting by Lieutenant Jerry Lester and Officer Tommy Bell, was asked about individuals from an energy company going door-to-door to solicit homeowners. Green said the individuals tend to come through the area every couple of months.

While their practices can be “aggressive,” they are “legitimate businesses” in many cases, Green told the crowd. However, he warned them to be aware of unscrupulous people posing as energy workers to gain entry into a home. “They target the elderly and talk their way into the home,” said Green, at which point one person occupies the tenant while another sneaks into the bedroom to steal cash and jewelry. “Don’t let them in if you didn’t call, and if you’re not sure about them, call 911 and we will come and figure it out,” he urged residents.

A resident who said he is new to the area asked about measures the precinct is taking to reduce the amount of drivers speeding along residential streets, especially in light of the recent death of 16-year-old Robert Ogle on 80th Street in Middle Village, who was hit along with a friend by an allegedly drunk driver on his way home from a party.

The resident asked if the precinct conducts DWI checkpoints, as are done on Long Island. “Blatantly, they don’t care about the law,” he said. “I watch them drive 90 miles per hour through a light in front of a park and school and kids.”

Green noted that a person was arrested in that incident and has been charged with vehicular manslaughter. He said the precinct has been making an effort over the past year to increase the number of drunk-driving arrests, which has resulted in a huge increase already this year. In addition, two additional officers have been trained to operate the radar gun. “We do it where there is a need,” said Green. “It is labor intensive and we have limited resources.” His officers focus on areas surrounding Juniper Valley Park and along Woodhaven Boulevard.

In connection with the February 1 incident that claimed the lives of Ogle and 20-year-old Alex Paul of Cypress Hills, a resident asked if the driver who left his car running outside a deli before it was stolen by the alleged hit-and-run driver would faces charges. Green said that while he discourages motorists from leaving their car unattended while running, doing so for more than three minutes only results in a summons and is not a criminal act.

A woman asked the officers what is done to inform residents when a registered sex offender moves into their neighborhood. Green noted that this question was likely prompted by rumors several months ago about a violent sex offender moving into an apartment on 81st Street across from Dry Harbor School. He informed the woman that there are no restrictions as to where sex offenders can move, including near schools, parks, daycare centers or playgrounds.

Green said NYPD does monitor registered sex offenders, but does not alert the public when one moves into a neighborhood. “It’s pretty much a checking in type of thing,” he said. “Believe me, people in the neighborhood knew about it before we did.” He noted that several websites allow the public to see if offenders are living nearby.

Later in the evening, State Senator Joseph Addabbo (D-Howard Beach) said he has been informed by attorneys that it is unconstitutional to restrict where individuals can live. He is now proposing a system by which residents can sign up to be notified by e-mail or text message whenever a registered sex offender moves into the area.

A resident asked Deputy Inspector Green about recent incidents of thefts of wheels from vehicles parked overnight in front of people’s homes. The resident said he had heard of at least three more of these incidents in the past few weeks. “Is there any particular way for the 104th Precinct to target these people?” he asked. Green said that the incidents have gone back about a year and mostly involve “high end” vehicles.

Some arrests were made late last year in connection with a rash of thefts, and the trend had appeared to have slowed down. “The problem had abated but it’s coming back,” he said, adding that the individuals arrested were part of an organized team. “We’ve reduced it, but it is still going on.”

While the resident assumed these individuals were using a large truck or van to carry out the heists, Green said it was actually a Honda Accord that was used by the team caught last year. They likely used several vehicles, with one group loosening the lug nuts before another group arrived with crates to support the now wheel-less vehicle. “They are using non-descript vehicles and they are organized,” he said.

The final question was in regards to the attack of a Parks Department worker inside Juniper Valley Park several months ago. Green said that nobody has been arrested in connection with that attack, which occurred early in the morning as the worker was going into a bathroom. Officers recovered a knife from a nearby trash can, but it didn’t contain any fingerprints.
Posted by The Forum Newsgroup at 12:15 PM