Board Concerned Over Restaurant Depot Demolition 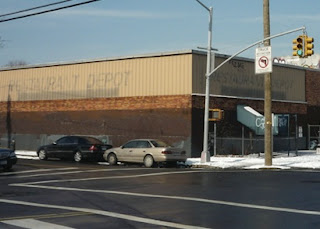 Members of the local community board are concerned about the imminent demolition of the former Restaurant Depot building due to the presence of toxic materials found on the 74th Street property, where the city plans to build a new 1,100-seat high school.

At last week’s Community Board 5 meeting Chairman Vincent Arcuri noted that the building, located at 74th Street and 57th Avenue in Maspeth, appeared on that month’s list of buildings to be demolished in the near future. Due to the level of toxins, including carcinogens, found on the site, the board sent a letter to city School Construction Authority President Sharon Greenberger to ensure proper precautions will be taken to avoid any risks to the community.

“Considering the contamination found at this planned Maspeth High School site previously, it is critical that maximum protection against contaminants escaping into the environment be employed during demolition, excavation and removal of the existing building, the foundation, the footings and the soil,” wrote Arcuri, who also requested a meeting with the construction company hired by the city and SCA officials “responsible for oversight of this controversial project.”

Earlier this year, CB 5 members voted against the city’s proposal to build an $80 million high school on the 54,000-square-foot property adjacent to the Long Island Expressway. Despite objections from Councilwoman Elizabeth Crowley (D-Middle Village), the City Council voted 38 to 10 in April to approve the Department of Education’s plan. In May, the city purchased the property for $16,250,000, according to public records.

Arcuri told his fellow board members and the audience at Christ the King High School that he is “a little concerned” due to the presence of toxins on the site. “Not knowing anything about the contaminants, we’re bringing that question back up,” he said of the board’s letter to the SCA.

In response, a city DOE spokesman told the Forum that no exact demolition date has been set, but it’s expected to take place “within the next few weeks.” The spokesman said the site is safe for construction and that safety precautions will be taken to ensure the safety of the property’s neighbors and future occupants.

“As to the concerns raised by CB5 in regards to toxins found at the site, it's important that I express as unequivocally as possible that this site is absolutely safe for the construction of a new school building. Like all urban soil, the soil at the Restaurant Depot site does contain some mild contaminants,” said DOE spokesman Will Havemann.

Approximately ten feet of dirty soil will be removed from across the site before construction begins. In addition, building will be equipped with a “barrier system to ensure that no soil contaminants can ever enter the building,” said Havemann. “These controls far exceed the standards observed by private developers, and are precautionary measures taken to make double-sure the school building will be a safe and excellent place to learn.”

Earlier this summer, former City Councilman Thomas Ognibene filed a lawsuit on behalf of the Juniper Park Civic Association and Communities of Maspeth and Elmhurst Together claiming that the SCA withheld information about high levels of toxic substances on the property.
Posted by The Forum Newsgroup at 2:40 AM