Councilman Vows to Wipe Out Graffiti 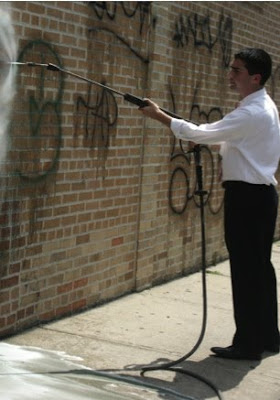 The scourge of graffiti is the latest to jump on the “zero-tolerance bandwagon” - that is, at least, in the city council district that encompasses Howard Beach, Broad Channel and parts of Ozone Park, South Ozone Park, Richmond Hill, Rockaway and Woodhaven.

Last Friday, Councilmember Eric Ulrich held a press conference announcing the decision to bring to his district what is being touted as “an aggressive and effective initiative” aimed at the total elimination of graffiti vandalism.

“I funded this program to tackle graffiti once and for all in this district,” Ulrich said standing in front of the MET Supermarket at 102rd Street and 101st Avenue. The store is an obvious backdrop choice--its outside walls littered with graffiti. The site typifies, according to the councilman, “the burden that graffiti imposes on local business owners and shoppers at the hands of vandals.”

The Greater Woodhaven Development Corporation has partnered with Ulrich in the initiative. “Our communities are strong and stable-- graffiti can make them look as though they are not,” stated Maria Thomson. Ulrich thanked GWDC as well as commending police at both the 106 and the 102 for all their efforts to eliminate graffiti.

The group acted as the administrator for the $30,000 in discretionary funding allotted by Ulrich who earmarked the money for the organization to use toward efforts to eliminate graffiti. The bidder was chosen after reviewing five respondents who replied to a Request for Proposal issued by GWDC. The selected bidder agreed to the initial clean-up, monthly maintenance schedule and constituent component of the program.

“For years the Mayor’s office and the police have attempted to eradicate this nuisance. But, we’re going to take a very different approach”, Ulrich explained. The approach he refers to is one taken by City Solve, a firm that concentrates solely on private graffiti removal.

The company that was awarded the bid for the project has a plan of action that began with a complete “graffiti inventory”. Specially equipped trucks were to begin attacking identified targets as early as the weekend, using a combination of pre-treatment, power washing and paint matching, to restore surfaces to look as though there had never been graffiti present.

City Solve’s owner, Bruce Pienky, acknowledges that the battle with graffiti takes time, but with his company’s approach, the war is being won. “In the beginning there usually is a lot of new graffiti.” Pienky’s comments are based on his experiences in more than a dozen different neighborhoods he provides similar services to. “There is still plenty of graffiti for us to clean, but … we have worn down their resolve.”

Effective immediately, Ulrich declared the areas of 101st Avenue and Rockaway Boulevard from 75th Street to 111th Street and along Woodhaven and Crossbay Boulevards from Atlantic Avenue to the south end of the Joseph P Addabbo bridge as “Graffiti-Free Zones.”

The three zones were chosen because they were ranked as the most adversely affected areas throughout the district. “That does not mean that residents outside of these areas will not be included in the plan,” explained Ulrich. In addition to the target zone automatically covered, resident and business owners can phone the councilman’s office to report complaints at any address in the district. Those calls will be handled as part of the constituent component of the plan which will dispatch trucks to these locations on a weekly basis.

Ulrich says his district has more than 127 instances for roll down gates just on 101st Avenue. In addition there are hundreds of more “pieces of inventory” that include garage doors, side walls and other commercial and residential property faces.

Business owners and private residents would be charged anywhere from $500 and upwards of $1,000 for the service if they had to hire a private company. Now the same service will be provided free.

Those in attendance at Friday’s conference were forced to agree that an on-site demonstration at the supermarket made a great first impression. Within three minutes after a technician started the job, the side walls of Met Food looked as if had never been vandalized. According to experts it would have taken more than an hour and a half to paint by hand. And it was Ulrich who volunteered to take the power washer from the technician, going on to wash away the graffiti. After rolling down his sleeves the he joked, “I have a new confidence in this equipment. It’s so easy even a councilman can do it."
Posted by The Forum Newsgroup at 3:50 PM