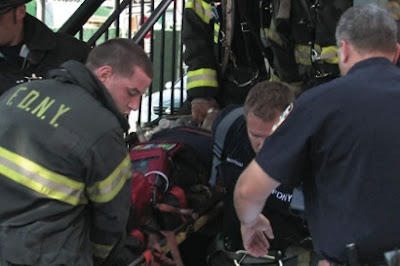 Firefighters administered CPR to a transit worker from the MTA Tuesday morning, after he fell onto the tracks at the Rockaway Boulevard station of the “A” train.

Scott Baur, a 26-year transit employee, fell off the platform around 10:30 AM and hit the electrified third rail, according to fire department officials.

The 48-year-old father of three was lying on the tracks when the fire department arrived. “He had no pulse when firefighters arrived at the scene,” said FDNY press spokesman Frank Dwyer. Attempts at resuscitation were made on the tracks, again on the platform and on the way down the stairs to a waiting ambulance. Baur was rushed to Jamaica Hospital where he was pronounced dead.

“The untimely passing of any transit worker is a tragedy but because of my background working on the tracks, the death of a track worker hits me especially hard,” said Department of Subways Senior Vice President Steven Feil. “He will be sorely missed by his co-workers.”

Initial news and web reports indicated that Baur had collapsed before falling onto the tracks. Charles Seaton, a spokesperson for the NYC Transit, said that the cause of death had not yet been determined.

On a website where MTA and NYC Transit workers exchange thoughts online, there were expressions of sympathy and the need for improved conditions with regard to the third rail.

One comment spoke of the need for safety markings. “Me being in OSHA training, having 3rd rails well marked is something that I think needs to be looked at by all agencies. Yes there are some that have the rail better marked than others, but the rail covering should have some form of reflective or very noticeable markings on it”.

Another submission read “One thing that WOULD help would be the contact shoe/rail arrangement. NYC Subways use a 'hot shoe' pickup riding on the 3rd rail's top surface. Somewhere, I can't remember, possibly LIRR, uses a shoe that rides the bottom of the 3rd rail which would allows better fitment of safety guards, plus reduces snow/ice build up problems with the pickup being forced up, off the rail by packed ice, then stalling equipment. I remember a few guys mention some have been hit with the 3rd rail current & live. But just a few.”
Posted by The Forum Newsgroup at 3:00 PM