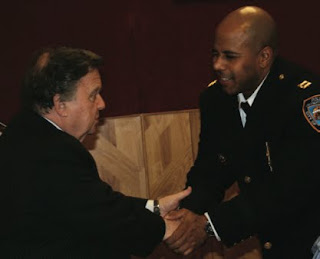 District Attorney Richard Brown paid a visit to the 102nd Police Community Council meeting on Tuesday night as part of his yearly plan to visit each of the Queens police precincts. The DA was given a warm welcome and began by informing those in attendance that violent crime was down by 10% in Queens.

Brown went on to say that the 80 homicides in Queens in 2009 represent a tremendous reduction over the last 15 years—in 1991 there were 361. He also cited large drops in stolen cars. “This doesn’t happen by accident. A lion’s share of the credit goes to the men and women of the NYPD,” Brown said. “Last year we processed 78,000 cases put on our doorstep.” Brown informed his audience that Queens was way ahead of the rest of the city in moving cases through the court swiftly.

Before leaving he invited anyone to visit the DA’s office of operations at the court house. “We will be happy to see any of you for a visit. Just don’t come in handcuffs,” he joked.

Capt. Armando DeLeon says that despite a plunge in crime in his precinct—it’s down about 41% over the last two years—there has been a recent spike in pattern robberies. The captain reported that there have been 8 robberies of late, 6 of which targeted women.

“We are looking for an individual who is approximately 5’4-5’5 tall, who carries a silver firearm.” The bandit approaches his victims with the handgun demanding their money and credit cards. Before leaving, the bandit demands his victims to surrender their PIN numbers for any ATM cards he steals. Most of the occurrences have taken place in the southern and western parts of the precinct, near the Brooklyn border.

A burglary pattern that police believe originated in the Bronx is also being perpetrated upon residents living in the 102. “We have individuals who are working in tandem, posing as utility employees in these incidents,” DeLeon explained. “They are ringing bells and representing themselves as workers from the gas company, ConEd or a cable company. You let the pair of them in and as one is looking at the boiler, a meter or the cable box, his associate is taking personal belongings in the house.”

The captain advised residents not to open the door under any circumstances. “If someone comes to your home, immediately call the company they say they are representing. Do not trust the fact that they have ID,” DeLeon warned, “there’s plenty of phony credentials circulating around.”

Residents can be relieved that there is increased police presence on their
streets from Monday through Friday 12 Noon to 7 PM. The police officers have been reassigned from other precincts and placed along Jamaica Avenue from 80th street to 118th street. The assignment of these officers has been very helpful according to DeLeon. “We have already seen major results from their presence,” commenting on a recent altercation among students from Richmond Hill High School that was quickly put to an end and a cell phone thief who was apprehended by the additional officers.

Before concluding, Capt. DeLeon suggested that residents should wear whistles and blow them as hard and loud as they can if they are accosted or face any danger. “It may sound corny,” said DeLeon, “but it will get everyone’s attention and it could save you.”

Robbery Victim Thanks 102 for Swift Action

On January 4, resident Harpreet Singh was walking to his home on 123rd Street off 97th Avenue with a friend when the two were accosted by three men who jumped out of a waiting car. The men brandished guns, holding one to Singh’s head and demanding his money and wallet. “They put a gun to my head,” said Singh, “and took everything I had in my pockets. I was very, very scared.” But Singh said the only thing that made him feel better about the situation was that almost immediately after he called 911, Captain

DeLeon and Officer McCoy of the 102 Pct were by his side. “These guys are great and I know they will get whoever did this.” Singh said that the thieves used his credit card to purchase gasoline in a nearby station minutes after robbing him. Luckily, Singh suffered no injuries.

President of the community council, Maria Thomson also informed residents that the 102nd Precinct is offering free NYPD Security Surveys for homeowners within the precinct. To arrange for the survey call the precinct at 718.805.3217 and speak to Detective Ronald Agunzo.

Form letters were also available for anyone whishing to contact Douglas Sussman, MTA Director of Community Affairs to protest the proposed elimination of the Q56 bus line and the Z train from the elevated J line.

The 102 Precinct Community Council meets at 8 PM on the third Tuesday of every month at the Moose lodge located on 118th Street off Jamaica Avenue, across the street from the 102nd Precinct stationhouse.
Posted by The Forum Newsgroup at 1:40 PM