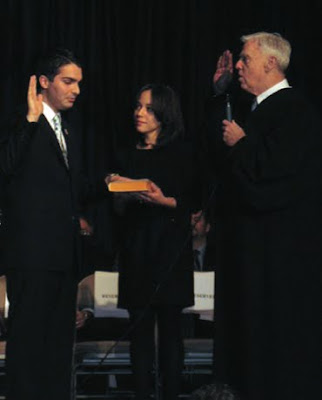 The ceremony began with an introduction by Brian O’Connell, principal of Scholars Academy, who was followed by a procession of the Breezy Point Catholic Club Pipe and Drum Band. The afternoon included a presentation of colors by the Air Force ROTC and performances by the Scholars Academy Band.

Former City Councilman and close friend of Ulrich Hon. Thomas Ognibene acted as the Master of Ceremonies for the event and the Hon. James Oddo, Minority Leader for the New York City Council was the keynote speaker.

Judge John Ingram presided over the ceremony, administering the Oath of Office as the Councilman’s wife, Yadira Moran-Ulrich held the Bible for the swearing in. The oath was followed by remarks from Ulrich who first credited his supporters for his election.

“The voters of this district have placed their trust in me and I hold their trust in the highest regard. Over the next four years, I look forward to working every day to live up to the expectations that the people have placed upon me. While we have accomplished so much in such a short period of time, I realize that there is still plenty of work to do.”

Ulrich concluded his remarks citing his upbringing as playing a vital role in his political and personal successes. “My family instilled in me the values I have today: to be compassionate and kind to others, and that hard work and honesty is rewarded. Their sacrifices have opened the door of opportunity for me. And where I come from, when someone opens a door for you, you have an obligation to hold that door open for the next person about to walk through it. I have never forgotten what my family taught me, and I never will.”

The 24-year-old Ulrich was first elected to the council in a special election held in February of 2009 and will serve through his current term in 2014.
Posted by The Forum Newsgroup at 2:00 PM