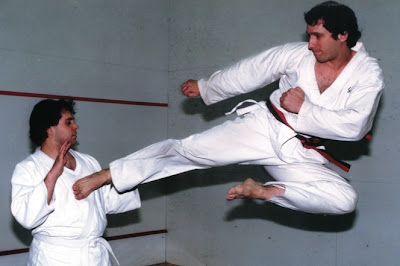 "Let's beat the crap out of cancer." That's the goal for Kew Gardens-based Martial Arts Therapy. Founded in 2005 by Rabbi Sensei Gary Moskowitz, the program was started to help heal kids with cancer and other terminal illnesses. By combining his passion to find a cure for cancer and his love of martial arts, Moskowitz has designed a program that helps his students deal with pain and fear management helps rehabilitation, and provides emotional and spiritual support.

Moskowitz, a former teacher at Far Rockaway High School and a retired New York City police officer, spends most of his days as a Rabbi at the Jewish Wellness Center synagogue in Kew Gardens or teaching martial arts professionally. His love for martial arts, which has lasted more than 40 years, began when he was a 13-year-old kid in the Bronx.

"I'm a natural coward," Moskowitz said, "I was so scared of everything." But martial arts gave him the knowledge that he could fight back. "It gave me hope and spirit." Moskowitz realized how adrenaline and natural endorphins released from physical exercise could bring both physical and emotional wellness. The confidence and self-esteem is what he tries to instill in each of his students at Martial Arts Therapy.

"It's not just a kick-punch program," Moskowitz explained, "True martial arts is about conditioning yourself, learning about your body, and living a long, healthy and sound life." The kids learn martial arts skills, but more importantly, they are also taught about proper nutrition, how their bodies work, and how to deal with the pain and fear their illnesses bring on a daily basis.

One way Moskowitz helps ease the suffering of his students is through a program called guidance imagery. "Guidance imagery means putting an image behind the pain and refocusing it," he said. He shows kids cartoons of a ninja cancer cell beating up healthy cells. The cancer cells are then beat back by samurai anti-bodies. Moskowitz believes that imagining the martial arts battle inside the body and fighting back helps refocus the pain and displace the fear the kids experience because of their illness.

Balance, in a literal sense, is also a major focus in the Martial Arts Therapy program. The vestibular system, which helps balance and spatial orientation, can be strengthened Moskowitz claimed: "We can work out the vestibular system just like we can lift weights to build muscles."

His work with Philip Califano is a good example of restoring balance. Califano was diagnosed with a brain stem tumor when he was six years old that impaired the coordination and balance in his legs. Moskowitz contacted Califano after learning about a fundraiser in Forest Hills raising money for medical bills.

Now, seven years old, Califano attends Martial Arts Training sessions where Moskowitz has him perform kicks and other moves. By taxing the vestibular system with martial arts, Califano emerges from his sessions more focused and with better coordination.

Domenica Califano, Philip's aunt, has seen first-hand how Moskowitz's program has helped her nephew. She's seen a marked improvement in Philip's condition. "Absolutely," Ms. Califano said when asked if the program works and if she would recommend it to others. "It's mind over matter."

As Moskowitz helps others, he encourages his students to do the same. "It takes their mind off their own problems," Moskowitz said. "I had a 12-year-old girl with cancer doing community service in the Bronx. She wanted to feel like she was doing something for others." Building a sense of community and serving others is a major focus for Moskowitz.

Moskowitz understands his students are often very sick, and he tries to accommodate them by making his program fun. There's dojo dancing where martial arts moves are incor- porated into a dance routine. Another popu- lar element of the program is virtual karate. Virtual karate is non-contact sparring session where two kids standing ten feet apart stage a fight. A panel of judges decides whether the blow would have landed in a real sparring situation. This allows kids who may be too weak for physical contact still feel like they belong.

If working free of charge to help kids with cancer wasn't enough, Moskowitz has expanded his Martial Arts Therapy program to include veterans from Iraq and Afghanistan and victims of domestic abuse. He has found that he can transfer many of the same methods to help those groups.

Moskowitz sympathizes with victims of domestic abuse. Nobody deserves to be treated in that manner, but he also fears for the kids. "Many of these women are mothers. There is a tremendous amount of difficulty in raising kids when you live in fear," he said. "I'm not teaching them to poke their boyfriends in the eye or kick them in the groin. They just want to repel the attacks and get away and get help."

Evelyn Gonzalez volunteers for Moskowitz and helps bring victims of domestic abuse to his classes. She is a huge fan of the program. "They feel powerless and helpless," she said, "It helps empower women. It's a good opportunity for them."

Moskowitz and his team of over 50 volunteers work tirelessly to administer these free weekly Martial Arts Therapy classes. He hopes to one day have a full-time facility and staff in place to continue the program and offer help any day of the week.

To accomplish that goal, Moskowitz is working fervently to get some funding for his organization. "It's like going through an army to get help," he said about getting government funding and grants.

With or without funding, Moskowitz will continue to help those in need with Martial Arts Therapy, every Sunday at Anshe Shalom Chabad Jewish Center in Kew Gardens, and he will continue to campaign for more research to help find a cure for cancer.

To learn more about Martial Arts Therapy or how to help, contact Rabbi Sensei Gary Moskowitz at 917-916-4681 or visit martialartstherapy.org.

Posted by The Forum Newsgroup at 11:40 AM