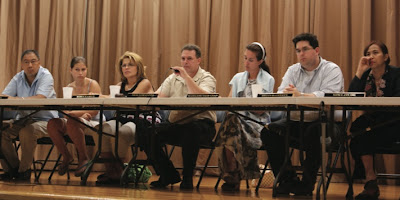 Representatives from the offices of Senator Joseph Addabbo (D-Howard Beach) and Assemblyman Mike Miller (D-Woodhaven) expressed that the legislature is hoping to avoid budget cuts to the education system.

Nick Comaianni, president of CEC 24, had a simple message for the elected officials as they return to Albany. “No bargain, no cuts to education,” he said.

Comaianni also asked that both Miller and Addabbo take time moving forward to talk to education councils and parents before voting on legislation concerning new charter schools. “They are private schools funded with public money. More oversight is needed,” he said.

Jeff Gottlieb from Senator Addabbo’s office said that in addition to avoiding cuts to education, there needs to be an examination of after school programs such as The Boys & Girls Club that are also suffering from overcrowding.

The problem of overcrowding continued to be a hot issue among parents.

“[PS] 153’s population is starting to grow and it’s rumored that Ferrara Lumber is moving,” said parent Joann Berger.” Development in the neighborhood [Maspeth] is something we need to keep an eye on.” She added that the community must take advantage of available property that could be used for a school.

Comaianni said that the CEC will continue to monitor the amount of students at schools, particularly PS 87, which is to receive an annex, to alleviate overcrowding. “We’re going to look at the numbers and if we have x amount of seats, we’ll rezone and bring more kids into 87,” he said.

Parents once again raised concerns about the lack of seats in gifted and talented programs for children entering kindergarten and six grade who pass tests to be admitted.

Superintendent Madeline Chan reported that 84 percent of principals responded to a Principal Satisfaction survey saying that they are satisfied with the help that they are receiving from the Department of Education. This year’s standardized test scores are expected to be released the week of August 19th and round two of pre kindergarten applications are now open on the Department of Education website.