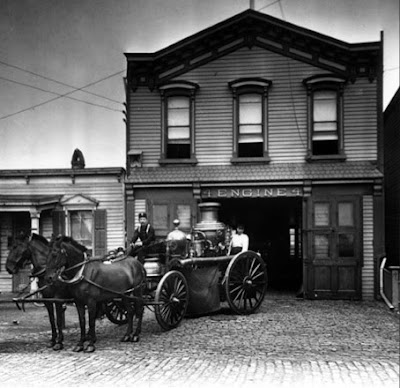 Fire fighters with Maspeth Steamer Engine No. 4. Despite bitter resistance, in 1898 once the boroughs were unified as part of New York City, fire department volunteers were replaced by professionals after insurance companies lobbied the governor. Seen here in 1908, this steam pumper is representative of the types of equipment available in the era to fight blazes across the city. As the internal combustion engine gained sway in the next decade, horses and steam would give way to motorized fire engines and equipment.

Kevin O’Donoghue is a journalist-turned-lawyer whose new book, Historic Photos of Queens, tracks changes in the borough from the 1880s to the 1970s.

O’Donoghue has a long history with Queens. He grew up in Bayside and remembers many days at Rockaway Beach as a child. “My family were lifeguards at Rockaway for over 60 years,” he said. He went to St. John’s University Law School, and his father teaches at John Adams High School.

O’Donoghue said working on the book was “a really great experience.” He enjoyed observing how his hometown changed through the years. “I love the tradition of Queens,” he said. “Ever since the incorporation of Queens into New York City it has continued to change. It’s fascinating.”

The most important catalysts of the change, according to O’Donoghue, were the bridges. “Queens always had a provincial feel, but the bridge connected us,” he said. For this reason, O’Donoghue considers the Queensboro Bridge “one of the most important engineering feats because it connected Queens to Manhattan.”

Besides the bridges, O’Donoghue appreciated the diverse photos of different neighborhoods such as the old Maspeth fire station or the swim club at Howard Beach. During his research, he also found great tidbits about the neighborhoods.

“Ozone Park was originally developed for middle to upper- middle class families, and it became more desirable when the elevated tracks were built,” O’Donoghue explained. “The name was supposed to evoke a futuristic idea of fresh air and beauty.”

The one regret for O’Donoghue is the underrepresentation of some neighborhoods such as Richmond Hill. “Richmond Hill is a neat neighborhood that had houses with ornate little gardens,” he said.

The latest picture in the book was from 1975, and O’Donoghue would like to do another book from 1975 to the present. There has been tremendous growth since then, especially in recent years. “A lot of change has occurred since just 1995,” he said.

Still, O’Donoghue’s book documents some major changes that have occurred. Whether it’s the amusement park that existed before LaGuardia Airport or the tent cities in Rockaway Beach, Queens is constantly changing.

“The most interesting thing about Queens is that Queens will always change, but it will always be the same,” O’Donoghue said.

Posted by The Forum Newsgroup at 11:49 AM