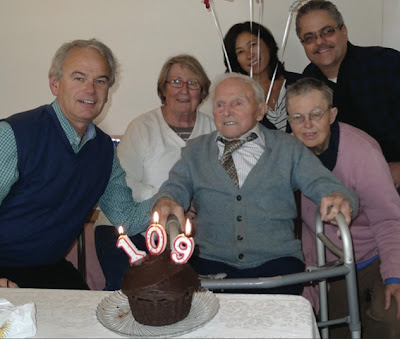 In 1928, Carl Berner emigrated from Germany and entered New York Harbor. By 1938 he had bought his first home in Middle Village for $5,190. Over the next 73 years, Berner has been a celebrated civic activist and one of the original members of the Juniper Park Civic Association (JPCA).

Berner celebrated his 109th birthday last Thursday—adding another year and milestone to his already long and fulfilling life. As a youth, Berner split time in France and Germany. He was educated in German public schools and learned English. After moving to the United States, Berner achieved the American dream.

He toiled for hours as the nighttime superintendent for the Chrysler building. He worked there for five years, ten hours a day, six days a week. Berner was offerend a position to become a U.S. foreign agent because of his fluency in French and German, but he declined. Instead, he started his own toy-making company, first out of his garage, which became very successful. He met his wife, Margaret, and had a daughter, Emily.

Berner’s toys became collector’s items, and his expertise was sought by many businesses. He was invited to train younger workers in the industry. After moving to Middle Village, Berner immediately joined the Eliot Av- enue Civic Association, the precursor to the JPCA. Since then, he has been a fixture in civic activities around the community. At 109, Berner is still active and eager to help his neighbors, “especially the elderly.”

Bob Holden, president of the JPCA, praised Berner’s work and what he sees for the centenarian’s future: “We expect to see Mr. Berner walking around the neighborhood in the spring.”
Posted by The Forum Newsgroup at 11:47 AM

May he live with vigor unabated another 40 years!