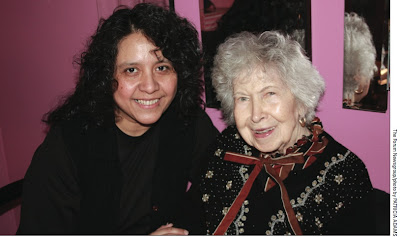 For most of us, living to celebrate our 101st birthday would be extraordinary enough. But for Forest Hills resident Regina Schilling Mittler, the number of years she has lived is just a fractional part of how extraordinary her life has truly been.

Born in Lemberg (then part of the Austrian Empire) on February 2, 1910, her mother was a concert violinist and her father a conductor. Much of her early childhood was spent in Czernowitz, where her aunt lived, while her par- ents were off on busy concert schedules.

Regina’s life would go on to be punctuated and shaped not only by the arts and culture, but also by one of the most tumultuous times in world history. It included hardship and struggle as early as her fourth birthday few of us ever encounter. It was 1914, World War I was underway, and Regina’s mother -- away on tour when all railroad connections to the Austrian Empire were severed -- had no way back to her beloved child.

Regina remained in Czernowitz under the care of a nanny for more than four years until 1918, when she was finally reunited with her mother. They travelled together to Vienna, and despite the fact that Regina was mal- nourished, she managed to escape the influenza epidemic that was spreading though the world.

In keeping with the family’s love of music, Regina was provided with piano lessons with a local teacher and within five years, she earned a full scholarship to the Vienna Conservatory. She was just 13 years old.

She continued on at the Conservatory, graduating with honors before passing the Austrian Music Teachers Exam. During her time at the school, Regina sang with the famed Arbeiter Chorus and attended the Vienna debuts of noted musicians Vladamir Horowitz, Bela Bartok and Marion Anderson. Following her graduation, Regina continued on at the conservatory as a staff accompanist and taught privately.

Regina was working as a piano teacher in Austria at the end of WWI, following the collapse of the Austro-Hungarian Empire. It was 1938 and demands for the union of Austria and Germany increased after Adolf Hitler became the Chancellor of Germany.

The German army occupied Austria on March 13th, and one day later, while she was giving a piano lesson, Regina got a phone call from her mother after the Gestapo had come looking for her. She had been a counselor in a summer youth camp run by the Social Democratic Party and now the Nazis were arresting anyone with a known association to the party.

When Regina hung up the phone she knew that her life—if she weren’t killed—had changed forever. She left the home of her stu- dent and immediately began her life in hiding. She moved from friend to friend for more than a year—hiding in basements and any other safe location available, sneaking around the streets when necessary. She waited for help from people with access to the American Embassy as they searched for her immigration number needed to secure her travel visa.

One day while walking past the American Embassy, Regina and her friends were approached by an official who asked them if they wanted to immigrate to America. Regina submitted an application, which was approved on her birthday in 1939. Her cousin Laura’s employer provided her with an affidavit and funds to buy a ticket to New York. She arrived in New York in March. She had escaped the Nazi’s and was safe.

In New York Regina visited Steinway Hall to receive a piano from a refugee relief agency, and there she ran into the composer and pianist Franz Mittler, a fellow refugee, with whom she had studied in the early 1930s. They grew increasingly close and got married in December of 1939.

In September 1943 the couple moved to Kew Gardens where Regina lived for 45 years until moving to her present apartment in Forest Hills in 1989. They had one child, Diana, who is still caring for her mother today.

Regina was interviewed and appeared in the film documentary “Last Stop, Kew Gardens” which was broadcast on PBS Channel 21 in 2008. After her retirement Regina devoted much time to reading and travel. Since 2008 she lives at home assisted by her 24-hour home attendants Rina Soldevilla and Virginia Martinez.
Posted by The Forum Newsgroup at 11:59 AM