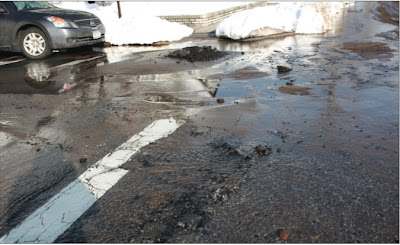 A water main broke on Saturday at the corner of 99th Street and 160th Avenue in Howard Beach and went unrepaired into Sunday morning leaving some area residents without water for about nine hours.

The break was reported to DEP through 311 by residents. “The water was shut off with no notice,” one resident told The Forum. Lisa, who lives with her family across the street from Charles Park said water service went down after 3:30 p.m Sunday and was restored around midnight.

According to officials, no notice was given to the residents about the shut off because it was an emergency situation. “The DEP’s priority was to get the water off and prevent dangerous icing conditions in the freezing temperatures,” said Betty Braton, chair of Community Board 10.

Water service was shut off to the area surrounding the break and crews worked from early Sunday morning to remove mounds of snow and ice in order to locate turnoff valves.

The break was repaired and service to approximately 100 homes affected was restored by the end of Sunday night.
Posted by The Forum Newsgroup at 12:02 PM