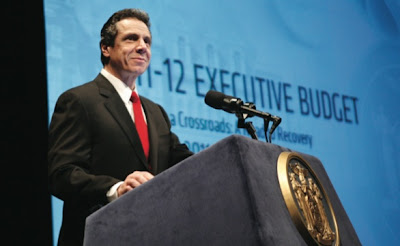 Governor Andrew Cuomo announced his executive budget on Tuesday, which he promised will “set our state on a new path toward prosperity.”

The key component to Cuomo’s plan is cutting spending for numerous agencies including education and healthcare.

“We simply cannot afford to keep spending at our current rate,” Cuomo said. “Just like New York’s families and businesses have had to do, New York State must face economic reality. This budget achieves real, year-to-year savings while restructuring the way we man- age our state government.”

The first goal for the budget is to reduce the cost of state government. State agencies will be instructed to maximize savings, and Cuomo wants to negotiate with state employee labor unions to save money. Cuomo said if savings could not be achieved, up to 9,800 layoffs would be necessary.

In the executive budget, Medicaid spending will be cut by 2 percent, or $982 million. Medicaid funding has spiraled upwards every year, and Cuomo said the practice was unsustainable.

The cuts in Medicaid could be critical to Queens residents who already lost Mary Immaculate and St. John’s hospitals in 2009. According to a report in The New York Post, the Governor’s cuts could put Wykoff, Jamaica and Peninsula hospitals in danger of closing.

In reaction to the news, city Councilwoman Elizabeth Crowley (D-Middle Village) released a statement slamming the proposed cuts. “Queens County has lost three hospitals in the last two years alone,” Crowley said. “The human costs of closing another one or two will far outweigh the financial savings for New York.”

Cuomo also announced plans to cut educa- tion funding. The proposed budget would cut funding by $1.4 billion. SUNY and CUNY schools will also have their operating aid cut by 10 percent.
The MTA will receive a small increase in funding, but Cuomo is proposing using $100 million from dedicated transit funds to pay off state debts.

State Senator Joe Addabbo (D-Howard Beach) said the budget was “a good first step.” “We definitely need to cut spending and reduce government,” Addabbo said. However, Addabbbo was wary of layoffs and cuts to education and healthcare.

Education and healthcare are two of the largest elements of the budget, but Addabbo said there is wasteful spending within the bptj that can be reduced. Over the next eight weeks, Addabbo wants to discuss the budget and determine what the cuts will do to the state and the city. “We need to see what the ramifications are if we implement this budget,” he said.

“That said, I am very concerned about the impact of eliminating aid to New York City. We cannot ask our already struggling schools to take another massive cut,” Miller said.

Addabbo said his biggest concern is that last year’s disastrous budget process is not re- peated. The 2010 budget was not passed by the April 1 deadline, and the legislature was forced to pass extender bills to keep the government working. Addabbo said Paterson held legislators hostage, with no room to negotiate, forcing them to pass Paterson’s budget.
Posted by The Forum Newsgroup at 11:50 AM