Adding a Kick to Conventional Medicine 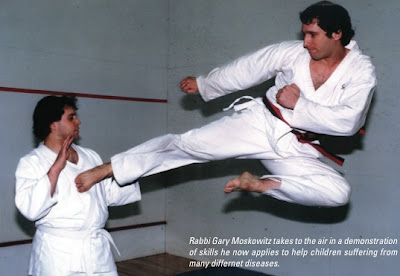 For years, researchers have marveled at the mind-body connection; postulating that what goes on in one’s mind can most certainly affect their physical existence and vice versa.

One Forest Hills man, Rabbi Sensai Gary Moskowitz has taken those mind-body theories to a level he hopes will translate into help for children with debilitating and even terminal illness..

A firm believer in the power that lies in the mind-body connection, Rabbi Moskowitz is a former New York City police officer who has done graduate work in law, social work and education. Moskowitz of Forest Hills, has made a name for himself as an educated and compassionate community resident.

Where he fits into the mind-body issue is with a long-time passion of his: martial arts. He holds black belts in Ju-Jitsu, Karate and Judo and has founded several community organizations related to martial arts.

Moskowitz first discovered martial arts as an adolescent. “I was a kid from the Bronx who kept getting beat up,” he said. “There was a lot of racial tension in those days – I was growing up in the 60s.” Things changed for him when he attended a special karate camp. “I did six hours of karate for six days a week for eight weeks,” he said. “It was an incredible initiative. It was like boot camp. It turned my life
around.”

A few days after returning from the program, a group of boys started a fight with him. But unlike before, he was armed with the confidence and self-reliance he needed to stand up to his aggressors. He described the experience as simply “life-changing.”

Beyond helping him physically, the program had proved beneficial on a psychological level as well. “It provided a practical value for everyday life,” he said. “If you are taking a test and you get nervous, it taught you how to calm down.” It is this peaceful aspect of martial arts that he found so helpful throughout his life. “There is a whole meditative piece that runs throughout a good martial arts program, he said.

“In my personal life and in my relationships, everything was calmer.” Even though martial arts taught him how to defend himself as a young boy, the rabbi is quick to remind people that it is far from just hitting people. In fact, it was this belief that led him to create Martial Arts for a Better Community, a group that he founded in 1979 after he began teaching martial arts. With his group, Moskowitz sought to join karate instruction with service work. “To me martial arts and community service aren’t separate,” he said. “They are one and the same.”

His students were required to take on a variety of community projects in addition to passing physical tests if they hoped to advance to higher levels. Before they reached black belt status, students had to participate in an even larger community-building endeavor, such as working with children who are blind or suffering from cancer, cerebral palsy or other ailments.

Moskowitz noticed that any aggressions, fears or family problems his students felt soon melted away as they advanced in martial arts. He was happy to see that they were learning the same values of tranquility and non-violence from martial arts that he learned when he began studying.

“One of my students told me about an incident where four guys attacked him,” he said. “During the course of the fight my student broke one of the muggers wrists and the other attackers ran off. Instead of running, my student stayed and splinted the guy's wrist.”

In his capacity as a rabbi he has done a great deal of work for synagogues and community centers throughout the city. However, one technique that he hopes to bring to greater awareness involves his work with children with cancer and other illnesses. Through a technique called guidance imagery, Moskowitz teaches children about the human body and helps them understand how it functions.

Then, applying a police technique, he advises children to “identify the aggressor” – meaning a cancer cell or other sick area of the body. Finally, the child visualizes a battle or swordfight between the cancer cells and disease-fighting agents of the body – white blood cells.

Moskowitz considers this visualization as part of the healing process. He believes that it is a valuable tool, rather than simply a pain medication pill, for dealing with the pain of an illness.

He encourages his students suffering from illness to practice karate, to whatever extent that they are able. One technique he has used involves having children stand several feet apart, so as to prevent injury, while they perform karate moves. He believes this enables the children to remain active and enjoy learning marital arts despite their health issues.

While the scope of his work to-date has been local, Moskowitz is currently working to establish a non-profit organization based on the principles of martial arts therapy. He hopes to provide a place where children suffering from any illness or disability can come to experience the benefits of meditation, physical activity and martial arts – a true mind-body-centered program.

When asked about how he plans to proceed with the development of the program, he urged anyone interested to visit his website at: www.geocities.com/ mnln2003/home.html. He hopes to connect with other influential community members in order to further develop the project.

There was one aspect of the program that Moskowitz was particularly adamant about: he wants the program to be completely free-of- charge. “I just can’t see charging money to the family of a child with an illness,” he said.
Posted by The Forum Newsgroup at 12:30 PM