Senate Candidates Face Off on Issues 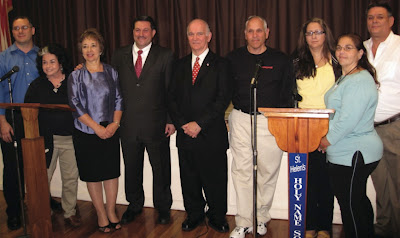 The two candidates vying to represent the 15th Senate District faced off for the first time at a debate Tuesday night in Howard Beach.

The event in St. Barnabas Church was hosted by the Howard Beach Civic Forum and marked the first time incumbent Serf Maltese (R-Glendale) and his challenger, Councilman Joseph Addabbo (D-Howard Beach) have faced off during the campaign in the 15th Senate District.

The winner on November 4 will represent the communities of Glendale, Maspeth, Middle Village, Ridgewood and parts of Elmhurst, Forest Hills, Kew Gardens, Ozone Park, Rego Park, Richmond Hill, Sunnyside and Woodside. Since it has the potential to help tip the balance of power on the Senate, the race has been one of the closest watched during this campaign cycle.

The event centered on issues including education, public safety, quality of life, healthcare and transportation, and the candidates were urged to refrain from making personal attacks. The format featured a general statement by the candidates on each issue, followed by questions submitted by the audience. 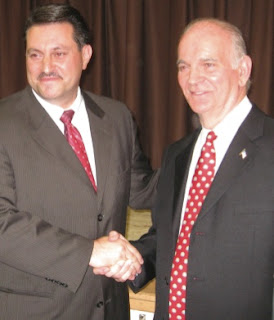 Calling higher education “very important,” Maltese said he has fought to provide the Tuition Assistance Program for as many students as possible during his 19 years on the state Senate. “I argue for Queens County so we can get every nickel we can,” he said, adding that he tries to visit all 50 schools in the district every year. “Because of my seniority [in the senate] I have been able to secure literally millions in grants for our schools,” he said.

Addabbo said the goal with education “is to keep everybody here” in the community. He stressed that the quality of a neighborhood depends on maintaining strong schools. “The funding formula is still unfair,” he said. “We need to get a fair share for our children.” Education “needs to be a rally cry in the state Senate… We need to get that money right into the classrooms – otherwise people will leave our community, and we don’t want that.”

Safety and Quality of Life

Maltese, an attorney, noted that his past experience as an assistant district attorney has given him knowledge of the legal system. “It was a twenty-four hour job,” he said. “That experience served me well later on… I think law enforcement and public safety is one of the most important things.”

He said he has been the prime sponsor on 239 “Maltese laws” including a bill that increases the penalties for drunken driving. He was also a co-sponsor of Megan’s Law, which requires sex offenders to register with the state. “Over and over again, I was one of the leaders on the Crime and Corrections Committee,” he said. “I made the concerns of crime victims one of the most important things.”

Addabbo touted his work as a member of City Council’s Public Safety Committee, which he said helped provide NYPD officers with up-graded equipment. He said there is a real need for “more police in our precincts” and said that the state “obviously has to do more” to help fund public safety in the city. He also wants residents to receive e-mail alerts when a registered sex offender moves into the neighborhood. “You don’t have to log on and check a list – they contact you,” he said. “It is important for our families.”

Addabbo also cited noise pollution, parks and graffiti as other important issues affecting residents’ quality of life. “We cannot neglect these issues. I have not done so on the City Council and certainly will not do so on the State Senate.

The candidates were asked about recent incidents of dead fish washing up in the Shellbank Basin. Addabbo had raised that issue while discussing quality of life issues, and stressed that the sight and smell of thousands of dead fish did have an effect on residents.

He said he received calls from residents on his 24-hour constituent line when the problem first arose several weeks ago. He immediately notified the mayor’s office. “It is very important that we take control of these quality of life issues and not let them fester,” he said. He said a meeting is scheduled for October 3 with representatives from the city Department of Environmental Protection and the state Department of Environmental Conservation.

“They need to tell us what happened, why it happened, and how it should never happen again,” said Addabbo. “No more finger pointing. There will be a meeting and we will get answers.”

Maltese said his local district office was alerted to the situation by a local doctor and that he immediately notified DEP Commissioner Emily Lloyd. “She said it was the first she had heard of it and would immediately tend to it.” The next day, the DEP were at the basin, scooping out the dead fish, he said.

Addabbo stressed the need for the state to better support local small businesses, instead of providing funding to large corporations and big box stores. “The state doesn’t do enough for small businesses,” he said, calling them the “backbone of our community.” He called the state’s practice of funding big companies “wrong” and said that the program needs to be reformed to “put the money down to the local people.”

Given the tough economy, he ripped a proposal to raise property taxes. “You don’t raise property taxes, you cut government first,” he said. “This year’s state budget is wrong. How can you increase spending and not have the money to pay for it? For far too long, the old business as usual hasn’t worked in Albany. This year we have a choice.”

He also cited the 44 cases of foreclosures within Howard Beach, along with the approximately 500 families in danger of being foreclosed. “It will increase crime and decrease property values,” he said. “That’s a lot of homes. We need to call a moratorium on foreclosures.”

Maltese agreed that the “commercial strips are the lifeblood of our communities” and said he is “very firmly in support of small businesses” and has “fought against many big box stores” proposed for the area over the past few years. He said the Senate “acted immediately” to address the foreclosure crisis, which has hit Queens especially hard. He said a bill was passed to place a moratorium on foreclosures, a statement later challenged by the Addabbo camp.

“What’s occurring on the federal level is going to affect us all,” he said of the current economic crisis hitting Wall Street. He said the six percent cut to the state budget was not enough. “The fact is, we have to take our belts in, and we can do it.”

Maltese called mass transit “vital to the communities of this senate district” and noted that he funded $2 million of the $2.7 million renovation of the Metropolitan Avenue M train station in Middle Village. “I was able to put money right into a station where it was needed,” he said.

He also boasted of the $1.2 million reconstruction of Eliot Avenue, which made it safer where it cuts through a cemetery. “He said he is “against any increase in tolls or fares,” which “isn’t the [right] way [for the MTA] to raise money.”

Addabbo called for “making transportation more reliable and safe.” He spent seven years on the City Council’s Transportation Committee, and stressed the need to both criticize and work with agencies like the MTA. “I’ve grilled them on how they do things,” but also gained increased service on some bus routes “by working with the MTA,” he said.

An issue close to home for Addabbo is eliminating the toll to cross the bridge into Rockaway. “It’s absolutely unfair we pay a toll to visit the Rockaway beaches,” he said. He said the toll should be eliminated between Labor Day and Memorial Day. “We should be able to enjoy the rest of our borough – our borough – without paying a toll. It has to be removed,” he said.

Regarding the proposed MTA fare hike, Addabbo said the authority “has a real problem” and stressed that their books must be examined “to make sure they’ve made the proper cuts internally” before fares are raised. Addabbo said he recently submitted a petition to the MTA with more than 2,000 signatures of residents opposed to a fare hike.

Maltese said he meets regularly with MTA officials on issues such as fare hikes. “I don’t like it and I know our constituents don’t like it,” he said. However, he said that due to the state’s current economic difficulties, “I know we are going to have more problems.”

Addabbo stressed that healthcare “needs to be made more accessible and more affordable.” He cited Medicaid fraud as a major issue that needs to be addressed, with billions each year being diverted from other programs. “Those are dollars that can be spent on families and schools,” he said. “We need to get a handle on this.” He also argued that the state’s plan regarding hospital closings needs to be reexamined. “We need to keep those hospital doors open,” he said.

Maltese noted that he helped restore $59 billion for nursing homes and hospitals that former Governor Eliot Spitzer cut from the state budget. “I’ve tried to keep my eye on hospitals in Queens County,” he said. “The fact is, I was able to save [Wyckoff Heights Hospital] in 1990, not only for the employees, but for the people who patronize it.”


Addabbo and Maltese pose with members of the Howard Beach Civic Forum’s executive board following Tuesday’s debate (above), and the candidates shake hands after the debate.