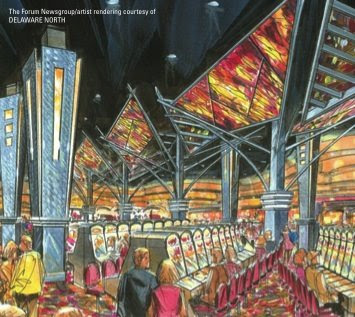 Swayed by the promise of a huge upfront cash payment to the state, Governor David Paterson and the Democratic-led Assembly have chosen a Buffalo-based company to operate a video lottery terminal casino at Aqueduct racetrack.

The state anticipates that Aqueduct will attract 20,000 visitors daily and will generate $1 million each day in tax revenue once the VLT casino is built. Construction on the racino is expected to take about one year after Delaware North obtains the necessary approvals.

However, the governor’s announcement has already been met with opposition from Senate Majority Leader Dean Skelos, who says that Delaware North’s plan is not the best option for the community in the long run.

Skelos noted that “only recently” did Delaware North hire The Pebbles Corp to design plans for other amenities to be built at Aqueduct in the future, including a $15million hotel and conference center and a 3,000-seat boxing and concert hall. Skelos noted that Donahue Pebbles has “yet to provide a plan that could be reviewed and vetted by state and community organizations.”

In contrast, Capital Play, an Australian-based company, had partnered with Mohegan Sun on a plan that included restaurants, shopping, entertainment and a hotel and conference center. SL Green had teamed up with the Hard Rock brand to create a full entertainment destination featuring a hotel, restaurants, a spa, high-end retail and outlet shopping and an entertainment industry.

In announcing the decision, Governor Paterson cited Delaware North’s successful track record as a partner in upstate racing and gambling ventures and called the agreement “the best deal for all New Yorkers” in a statement released by spokeswoman Risa Heller.

“Of the bids put forth, Delaware North presents the strongest financial proposal with an up front payment of $370 million,” said Heller. “Combined with their successful track record… and with vast experience operating VLTs, Delaware North will build and operate a successful facility… which will provide additional vital resources for the Queens community, the upstate economy and education throughout the state.”

Skelos argued that Delaware North’s proposal will fail to make Aqueduct a “true destination venue [that] would create more jobs and generate more revenue for education in the long run” compared to the two other options. “It appears that in an effort to close the budget deficit, Governor Paterson has made a choice that may not be in the best long term interests of the state or for the communities that surround Aqueduct,” he said.

In response, the Governor’s office accused Skelos of attempting to “stall a significant economic development project” that would provide an important revenue stream. “In this time of a financial crisis, every day we delay hurts New York,” said Heller.

Senator Serf Maltese (R-Glendale) said in a statement this week that Delaware North “has all along been nearly everyone’s third choice” and noted that residents living and working near the racetrack “are deeply concerned” about its future and should have a say in the process.

“Aqueduct has enormous potential to be a major tourist attraction and destination venue and we must not lose sight of that fact in making any decision,” said Maltese. “The surrounding communities have lived for years with problems caused by Aqueduct and now that such a major undertaking is finally coming close to fruition, those same communities… should be the ones to share in the benefit.”

According to sources with knowledge of the process, SL Green and Capital Play are furious that Delaware North has been allowed to modify its proposal to add Peebles (who has not been vetted by the Lottery Commission - a requirement of the state for the other bidders) since their presentations to the Governor's panel in Albany in April.

As a result, legal challenges are expected since the state apparently did not adhere to its own rules by allowing Delaware North to add change its proposal and add Peebles after the three bidders submitted their final proposals. That could mean further delays in starting the VLT's at Aqueduct.

Some now question whether NYRA, which was recently bailed out of bankruptcy by the State at a cost of over $300 million, might not survive if the VLT's do not start producing revenue soon, perhaps requiring another bailout.

Senator Maltese and Assemblywoman Audrey Pheffer (D-Rockaway) have both expressed concerns at local meetings in recent weeks that since the State is losing out on a million dollars a day in revenue due to the delay in getting the VLT operation at Aqueduct up and running, Delaware's upfront offer of more money might sway the Governor's decision.

Local leaders have also indicated disagreement with Governor Paterson's position. At the most recent meeting of Community Board 10 earlier this month its chairperson, Betty Braton, voiced the community view that both of the other proposals, from Capital Play and SL Green, offered more over the long-term to the State and that both groups had provided far more information regarding their plans than Delaware.

"We've had the opportunity to talk with them on a number of occasions, both entities, Capital Play and SL Green, have gotten involved with local community activities, both have been accessible and have provided information over the last year or so as this process has moved forward," Braton said. "Unfortunately that has not been the case with Delaware, which raises concerns for us at the local level as we are the people who will be most directly affected by what happens at Aqueduct."

On another front, Mitchell Ettess of Mohegan Sun, which has partnered with Capital Play, is on record as stating that their world class entertainment destination plan would generate $6.0 billion more for the State for education. He said he is perplexed as to why the state would seek more money up front at the expense of billions of dollars more offered under the Capital Play Plan. An SL Green spokesperson is also perplexed by the choice of Delaware North.

Others in the area have voiced concerns that Delaware North will build a “down market slots in a box” facility providing only “one shot” quick fix for the State budget, that they believe will lead to problems with gambling addiction and crime in southwest Queens.

Many locals are strongly urging the Governor and legislative leaders to reconsider the choice of Delaware North and put the people of Queens and the state of New York first and choose either Capital Play or SL Green.
Posted by The Forum Newsgroup at 11:35 PM