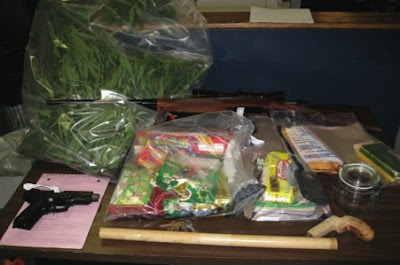 An investigation by the 104th Precinct’s Street Narcotics Enforcement Unit led to the arrest of a married couple and their two children on charges they grew marijuana in their 72nd Place home.

The investigation into drug activity inside 53-30 72nd Place ended at about 6 a.m. Tuesday when officers from the precinct, armed with a search warrant, and members of the NYPD’s Emergency Services Unit raided the home.

In addition to several pot plants, officers found two unlicensed guns, a stash of fireworks and an MTA police badge. As a result, the husband and wife who live there, Richard Stancati and his wife, Hope Stancati, both 53, were arrested along with two sons, Jason, 24 and Jessie, 19, according to police.

On Wednesday, the office of Queens District Attorney Richard Brown said the four defendants were being held pending arraignment in criminal court on charges of first-degree reckless endangerment, second-degree possession of marijuana, unlawfully dealing with fireworks and growing cannabis.

Among the items recovered at the house were two pot plants from the backyard, six plants from a fish tank on the roof, one plant from a backyard table, one from an alleyway next to the house and two others from the roof.

Police also found a glass vial containing marijuana in a drawer in the son’s bedroom. In addition, police recovered a stash of fireworks from a backyard shed, according to the district attorney’s office.

According to sources, the family became known to precinct after Richard Stancati got into an altercation with employees at Maspeth Town Hall after a ball accidentally went over a wall and into his yard.

Hope Stancati was previously quoted in The Forum West regarding her efforts to fight against a cellular tower proposed for her neighborhood, which is near Maspeth Town Hall. She is among a group of residents who don’t think it is appropriate to place the cellular tower on top of a house in the residential area.
The arrests were made by Officer Alison Potokin of the precinct’s SNEU team.

A Middle Village man with an extensive criminal record has been charged with breaking into a Ridgewood fitness center, according to police.

John Maggi, 37, of 58-37 80th Street, was charged with third-degree burglary and possession of marijuana and paraphernalia after police caught him breaking into a Dolphin Gym branch on Myrtle Avenue.

According to the 104th Precinct, a witness called police to report that somebody had thrown a brick through a glass door at the rear of the building at about 1:40 a.m. on Tuesday. Officers found money allegedly taken from the gym in Maggi’s pocket after finding him at the scene, said police.

A man was accosted and robbed by three men while walking along a local street early Sunday morning, according to police. The suspects are still at large.

The victim was walking near Seneca Avenue and Himrod Street at about 4:45 a.m. Sunday morning when three unidentified men approached him from behind, according to the 104th Precinct.

One of the suspects identified himself as a “detective” and told the man not to move. The perpetrators then threw the victim against a wall and went through his pockets, removing cash. They fled in a grey sedan, but the victim was unable to provide police with a description of his attackers or their getaway car.

The NYPD is continuing to investigate the incident since one of the suspects identified himself as a police officer.
Posted by The Forum Newsgroup at 11:00 PM

From what I understand , This Arrest was totally illegal right from the Getgo. D.A. Richard Brown should be investigating the Police moreso than the defendants in this case. How did they get a search warrant to search a home without Fresh evidence?Why were young maple trees and tomato plants ripped out of the ground and taken from the backyard? Is it because the Police really don't know how to identify Marijuana? I think they are probably smoking it.You can see from the photographs that the guns recovered were nothing more than toy cap pistols and the fireworks (what a joke) were seized because they really had nothing else. The Police in this command are incompetent and could not find a collar in a shirt factory. Also the tactics used by the emergency service Unit were an embarassment to the NYPD.

As an Attorney, I am amazed myself that a search warrant for an entire home could be obtained based solely on what someone observed as 2 alleged plants growing in a fenced backyard. Something just does not smell right here. There does not appear to be anything of substance that was found in this apparently unlawful search and seizure.

most likely the cops scan the neighborhood with one of those infrared heat detectors that can see which areas light up from the use of growlights. since growlights are pretty much used only to grow weed indoors, the cops had an easy way to get a warrant faked if they were sure they were gonna score something. more people in the 104th that don't agree with this illegal kgb style of policing should start growing their own christmas trees indoors with the use of growlights, get raided by the cops and expose them in their illegal behavior. a similar thing happened with the crooked cops in odessa, texas. google it.