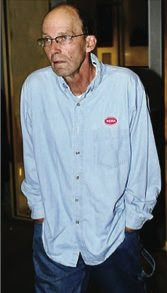 Rev. Charles Plock, 63, was arrested last Friday at his apartment in Murray Hall on the St. John’s campus after allegedly sending his webcam video to an undercover detective with the Adams County, Colorado Sheriff’s Office who was posing as a 13-year-old boy.

Plock was arraigned in Queens Criminal Court that evening and is scheduled to make his next appearance on November 10. He faces up to four years in prison on the top charge of attempted dissemination of indecent material to a minor, a felony.

Judge Robert Raciti agreed last week to release Plock on $150,000 bail under the condition that he reports to St. John Vianney Center, a residential psychiatric facility in Downingtown, Pa. The 10% cash needed to secure Plock’s release from custody was reportedly collected by fellow priests at St. John’s, and the school announced this week that it has suspended Plock.

About a dozen people waited outside Queens Criminal Court for Plock and greeted him with shouts of “Shame on you” and “pedophile” as he walked by, according to the Daily News. Citing police sources, the paper reported there is no indication that Plock has abused any St. John’s students.

The criminal complaint against Plock accuses him of attempting to disseminate indecent material to a child beginning on September 2 of this year. Plock unwittingly was drawn into the Adams County Sheriff’s Office sting operation when he initiated a conversation with an undercover officer.

Using a Yahoo screen name, Plock told the “teenager” that he was a 47-year-old catholic priest who taught and counseled college students at a New York City university. When the officer responded that he was 13 years old, Plock allegedly asked if he was gay and provided him with his phone number.

The next day, the officer was using the same undercover persona when Plock again contacted him and invited him to view his webcam. The officer observed “a white male from the chest down exposing his genitals.” The officer responded, “I am 13 and have never gotten to see that.” During this time, Plock’s webcam was turned on and clearly displayed his face to the officer, according to the criminal complaint.

The incident was referred to the NYPD, which subpoenaed Yahoo records for the screen name allegedly used by Plock which show that the IP addresses used to access the account are assigned to St. John’s University’s computer network. The addresses where eventually traced to Hollis Hall, which is where Plock’s office is, and Murray Hall, where he lives. Investigators believe that Plock made the videos in his on campus bathroom.

Students reacted in shock to the charges on The Flashlight, an online publication providing news about St. Johns. “I knew Fr. Charlie from back when I was a student a St. Johns,” wrote user Kathleen. “It is shocking news that is hard to grapple with. He has done so much good in his life for disadvantaged, very poor people. Clearly he needs help. There are many good priests out there and I pray for anyone affected.”

Other students told the Daily News that Plock was known as a cool priest who was willing to sit and talk and share his Marlboro Light cigarettes. “Father Charlie? No Way! He was a pretty all right guy,” freshman Kevin Winters told the paper.

Instead of awaiting his next court appearance in a jail cell, Plock has been ordered to check into St. John Vianney Center. Its Website describes it as a “community of faith that provides a pathway for religious and clergy to take towards healing and hope” by extending “professional treatment and support services as well as education programs which are spiritually based, holistic and sensitive to individual needs.”

The center, which is sponsored by the Archdiocese of Philadelphia, is located in a quiet suburban area near several country clubs. It has been treating members of the clergy since 1946.
Posted by The Forum Newsgroup at 10:30 PM