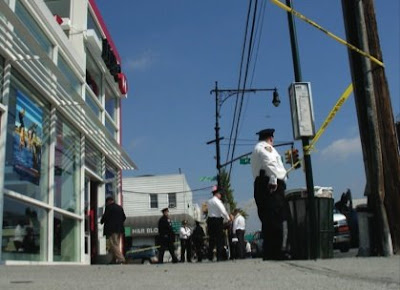 A man who attempted to rob a local bank was arrested by an off-duty police officer following a struggled that left the cop injured.

Robert Jabonowski, 36, with no known address walked into the HSBC bank at 65-63 Grand Avenue at about 11:30 a.m. Thursday and pulled out a silver gun before passing a note to a teller demanding money, according to police.

Officer Patrick Plunkett, a member of the NYPD stationed to a Manhattan housing project was inside the bank at the time of the attempted robbery. He identified himself as a police officer and approached Jabonowski from behind. As Plunkett grabbed him, the suspect began to fight back, punching the officer several times in the face.

The 104th Precinct initially received a call of a dispute in the bank and arrived to find the officer and suspect wrestling inside the bank. Officer Juan Gomez arrested Jabonowski, who was charged with first-degree robbery, possession of weapon and stolen property and assaulting a police officer.

Officer Plunkett was slightly injured in the fracas, during which one of his teeth was knocked out, said police.
Posted by The Forum Newsgroup at 10:00 PM