One Family Fights Back Against Juvenile Diabetes 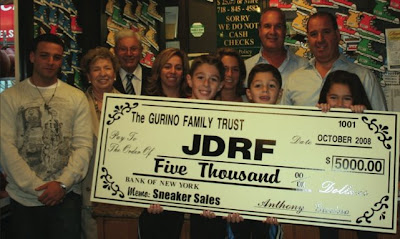 “As parents we’re always looking to protect our children, but there is no preparing for the day you see your child on the verge of collapse and find out he has this life threatening illness.”

The last thing Linda Gurino ever expected to have to face was a health crisis with one of her children. But when it happened, Gurino says her family’s world and life as they knew it was turned upside down.

There were really no signs or symptoms that would ever have prepared the Gurino family for what they were about to encounter. Anthony and Linda Gurino’s oldest son, 10-year-old Vincent, seemed to be perfectly healthy. But on a family vacation to Shelter Island, the tables turned and they were dragged into what seemed like an inescapable nightmare.

It began when the family was getting off the ferry. Vincent became extremely agitated, repeatedly screaming to his mother that he was thirsty. “His reaction was alarming,” Linda Gurino said, “totally unlike my son’s normal behavior.” The boy spotted a supermarket and went running inside. His mother ran after him and upon entering found him pouring a jug of apple juice down his throat.

According to the Gurinos, Vincent had displayed an unusual thirst for the three weeks before this incident, however he had a bout with the summertime Coxsackie virus, which is known to cause extreme thirst on occasion, and his family physician attributed his thirst to that.

Luckily however, Vincent’s parents decided not to take any chances and rushed their son to a hospital in Greenport near Jamesport on the North Fork of Long Island. It was there that doctors leveled the Gurino family with the news that Vincent’s blood sugar was at a level of 1,000, well above the normal range of between 70 and 120. Doctors at the hospital remained baffled as to how the boy had not lapsed into a coma.

It was there at Greenport that Vincent was diagnosed with Type 1 diabetes, otherwise known as Juvenile Diabetes. From Greenport they transferred Vincent to Schneider’s Children’s Hospital where the family stayed for three nights. Linda Gurino says that despite the panic that had swept over her family in the past twenty-four hours, she began to see some light at the end of the tunnel.

That light came in the form of her brother-in-law, Angelo Gurino and two family friends he brought with him. “Joe and Maritza Mure are my life savers,” said Linda Gurino.

And it’s no wonder that the Gurino’s would be extremely thankful for their help. Joe Mure is the President of the Brooklyn-Queens Chapter of the Juvenile Diabetes Research Foundation (JDRF) and his wife Maritza is one of the leading champions of the cause to cure the disease that they are painfully familiar with. The Mure’s 9-year-old son, Michael also has the disease. The Mures stayed for hours teaching the family how to give shots and counseling them on different situations that would arise and how to deal with them.

After a three day stay at Schneider’s, Vincent was ready to go home, with a new regimen that included a high carb diet that was basically undoable for him. “My son had to eat just under 200 grams of carbohydrates a day to feed his insulin,” said Linda Gurino. “He just couldn’t handle it and was vomiting and getting really sick from the food.”

It was then that Maritza Mure took Linda by the hand with Vincent and brought them to the Naomi Berrie Center for Diabetes at Columbia Presbyterian Hospital. There, Linda Gurino says, a new world was opened up for Vincent and her whole family. At the Berrie Center there is an entirely different regimen which allows Vincent to take shots whenever he eats, and allows him to eat almost anything he wants to. The center is a pioneer of new technology in the field and is fast gaining world-wide recognition for their developments.

Now that a few months have passed, the Gurino family is starting to settle in to their new routine which includes a new diet for their household. “Before, I never allowed my kids to eat too much meat, especially beef. And drinking diet soda was out of the question,” but now Gurino says they are staples in the family diet, especially in Vincent’s. “The most important thing we can do for our son is to make our house normal under difficult circumstances,” Anthony Gurino explained. “We are all on a low carb diet now that Vincent has to eat that way.”

But looking for a silver lining can sometimes be difficult especially when it comes to scheduling. Linda Gurino gets up every night at 1 am and again at 4 am to check Vincent’s levels. “If they’re high, he needs to get a correction (insulin shot) and if his sugar is low, he needs to get juice and raisins to bring his sugar back up.” The difficult part of that routine is that pumping anyone full of sugar makes it hard to get back to sleep and before you realize it, the 4 am check-up is upon you.”

Despite a curve ball of this proportion being thrown at them, Vincent Gurino and his family have pushed on. They are getting used to the new words in their vocabulary--- blood test strips, glucose meters for home and school, the glucogon gun, sugar tablets, syringes and lancets. And because of a program at the Berrie Center, Vincent will be getting an insulin pump now that will cut down his every day shots to once every three days.

“We still have to log in everything Vincent does in terms of his shots, his food and carbohydrate consumption and his blood sugar readings,” Linda says. “And of course there’s the school participation that is so vital.” She describes what has happened over the course of the last months as an emotional roller coaster unlike any other. “I am basically ashamed about my ignorance of this disease before it hit my family. We all need to be aware of how devastating this is and how much we need help when it hits home.”

That is one thing that Linda says she will be ever grateful for. “I can’t express how I feel about the people that have supported us through this. You kind of expect it from your family, but you never expect it from the people who don’t know you at all.” They are the ones she says that have helped carry herself and her husband and kids through this ordeal.

The Gurino family is so thankful to all of those who helped them they are now actively raising funds for JDRF. Vincent’s uncle, Angelo Gurino launched a drive to sell paper sneakers at his Ragtime Gourmet Deli in Howard Beach to raise money for the race to cure Juvenile Diabetes.

And since his nephew was diagnosed Gurino has introduced many more sugar free, low carb products to the store. The Gurino Family Trust will present JDRF with a check for $5,000 at the upcoming JDRF Walk for a Cure on October 26 at Flushing Corona Park. In fact the Ragtime walkers for the day already number close to 100.

“When it first happens, the level of anxiety is overwhelming. You never think you’ll get over it,” said Linda Gurino. “But when you realize, after calming down and getting your head that the help you need is there. Whether it comes from medical professionals, total strangers, family or friends, you can learn, you can get through it and thank God, you can save your child.”
Posted by The Forum Newsgroup at 10:15 PM