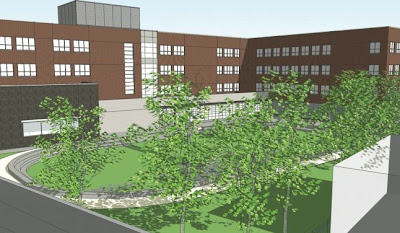 The city is moving ahead with plans to build a high school in Maspeth, but is unwilling to meet the biggest request from local residents – that the facility be zoned specifically for local children.

Officials from the School Construction Authority presented updated plans for a 1,100-seat school at the former Restaurant Depot site on 74th Street at last week’s Community Board 5 meeting. Based on concerns voiced at past meetings, the SCA has reduced the proposal from 1,650 seats and eliminated an intermediate school portion of the plan.

The proposal now calls for two 500-seat high schools under one roof, which is consistent with the city Department of Education’s push to create smaller schools. It will also include 100 seats reserved for District 75 special needs student as is required, according to Mary Leas, a project support manager for SCA. It is scheduled to open in the fall of 2012.

“We had a lot of feedback and listened to a lot of criticism and complaints,” Leas told residents and local officials who crowded into the cafeteria at Christ the King High School last Wednesday. “I don’t know if it’s more palatable or not,” but the authority did try to address the “very valid concerns” raised at prior public hearings, she said.

While school safety officers provide security while school is in session, the SCA officials noted that the DOE doesn’t provide parking for teachers or students. It was later suggested that the DOE could ask the city Department of Education to allow parking along 57th Avenue near the site of the new Elmhurst Gas Tanks park. Board member Kathy Masi noted that zoning the school for local students would eliminate the parking concerns, since most of the children would then walk to school.

Robert Holden, who is a board member and president of the Juniper Park Civic Association, expressed concern that DOE officials will decide to convert an area on the property currently set aside for recreation into classroom space. “What’s to prevent the city from coming in and saying it needs more seats?” he asked. “You could say 1,100 now, but by the time it becomes reality, it’s 1,650.”

Holden also questioned why the school won’t be zoned for local children, since they currently are forced to leave the neighborhood to attend high school. “What are the guarantees that our kids will go to this school?” he asked. In response, Leas conceded that she couldn’t make any promises regarding zoning, and that “preference will be given to Queens residents.”

Regarding concerns that the proposed capacity would be raised by the time the school is built, Leas said that “it is not our preference” to eliminate green space in favor of more seats. “If we have an explosion of more kids, we will continue to look for more sites,” she said.

A board member asked if the SCA and DOE had considered instead purchasing the former St. Saviour’s property in West Maspeth instead of the Restaurant Depot site. Leas said it was investigated but is “not really a desirable location for a school” due to its industrial setting and heavy truck and train traffic. She called the Restaurant Depot property a “spectacular site that doesn’t come along very often.”

Leas said the next step is to bring the proposal before City Council’s Land Use Committee for approval. At that point, the city would move ahead with a purchase of the property and hopes to have the design work completed by late spring, allowing the project to go out for bid by June. If a contract is awarded in the summer demolition work would begin by fall.

The community board’s executive committee will review the current proposal and is seeking follow up answers on issues including zoning, parking and the drop-off area. Still, despite the changes, concerns such as parking and security have not been addressed, argued board member Manny Caruana.

“It’s not the building the community is so concerned about, it’s the impact it’s going to have on the community,” he said. “I don’t see any of these problems being addressed… It seems that this is a done deal no matter what the community says.”
Posted by The Forum Newsgroup at 5:05 PM