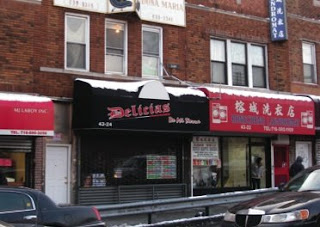 Two NYPD officers were indicted Thursday for falsely accusing four men of selling cocaine at an Elmhurst bar last year. The men were exonerated after surveillance footage showed that the officers and men never made contact that evening.

Police Officer Henry Tavarez, 27, and Detective Stephen Anderson, 33, surrendered to authorities on Thursday morning and were arraigned in Queens County Supreme Court on a 42-count indictment. If convicted, the men face up to nine years on charges including unlawful imprisonment, conspiracy and official misconduct.

The two officers were part of an NYPD narcotics unit conducting buy and bust operations at Delicias De Mi Tierra on 91st Place in Elmhurst beginning on the night of January 4, 2008 and continuing into the next morning. A total of six individuals were arrested for their alleged involvement in two separate drug transactions.

According to the charges, Detective Anderson bought three bags of cocaine for $60 from Gabriel Lira and Julian Martinez, but later claimed in court documents that he had only bought one $40 bag from the men. The officers then arrested Jose Colon, his brother, Maximo Colon, Raul Duchimasa and Luis Rodriguez and allegedly used two of the bags purchased earlier that night as evidence against the Colon brothers and their friends.

In reality, the officer “never bought drugs from them and the two bags of cocaine vouchered into evidence were allegedly the ones Detective Anderson had purchased from Lira and Martinez, according to a statement issued by Queens District Attorney Richard Brown. Based on the officer’s word, the six men were arrested and charged with criminal sale of a controlled substance, punishable by nine years in prison.

“Such egregious conduct not only taints the reputation of their fellow officers but erodes public confidence and trust in the department. Such conduct cannot – and will not – be tolerated,” said Brown at a news conference in his Kew Gardens office.

Five of the men were released on their own recognizance the same day as their arrest, but Maximo Colon spent three days in jail until he was able to post $2,500 bail.

Upon his release from jail, Jose Colon went back to the bar and obtained a copy of security footage showing that the officers and four men never made contact that evening. As a result, the charges against the four men were dismissed. Lira and Martinez have pled guilty to drug sales charges and are awaiting sentencing, according to Brown. Anderson, of Long Island, has since resigned from the police force and Officer Tavarez, of New York City, has been placed on modified duty.

“In joining the NYPD, the defendants took an oath to uphold the law and to protect the innocent,” said Brown. “Instead, they are accused of knowingly engaging in criminal activity that could have resulted in lengthy prison terms for four innocent men.”

After the bar provided Jose Colon with a copy of the surveillance tape, bar owner Eduardo Espinoza, 36, told the Daily News that officers from the 110th Precinct were harassing him and citing him with dozens of violations. “Every two to three weeks, there’s cops in here, searching the bar,” he told the paper. “If there’s no violation, they’ll make it up. I lost all my clients – everyone’s scared to come in my place right now.”

Espinoza said that he suspected police retaliation because of a phone call he received following the buy-and-bust operation. He said that a man who identified himself as the arresting officer asked if there was a camera in the bar. “I said I already gave it to the defendants,” said Espinoza. “He said, ‘Oh s--t.’ He hung up.”

An NYPD spokesman said at the time that the department was looking into the allegations of harassment, but a source told the newspaper that the frequent police visits were the result of numerous community complaints against the bar.

All arrests made by the two officers are being reviewed, according to the district attorney’s office. Prosecutors in Brooklyn dismissed more than 150 cases in 200 after four officers in the Brooklyn South Narcotics Bureau were arrested on charges they traded drugs for information.

An attorney for Detective Anderson did not return a phone call seeking comment on the charges against his client.

Lawrence Fredella, who is representing Officer Tavarez, said that was the first buy-and-bust operation his client had participated in.Officer Tavarez was not present inside the bar when the undercover cops - Detective Anderson and another officer who has not been charged - made the purported buy from the four men, said his lawyer.

After uniformed officers went inside the club and arrested the men, the narcotics officers told Officer Tavarez that they would credit him with the bust, according to Fredella. “He thought those guys really sold drugs to Detective Anderson. He was just following two senior officers and was out there to observe. It’s a little shocking that he was indicted and arrested on this… They are compounding a wrong situation by indicting a rookie officer.”

Fredella noted that his client was charged with about half of the 42 counts contained within the indictment and said Officer Tavarez has been cooperating with investigators. Detective Anderson was on the NYPD for eight years before resigning and Officer Tavarez is a four-year member of the force. According to the district attorney’s office that evening was the first time the two officers worked together.
Posted by The Forum Newsgroup at 5:00 PM