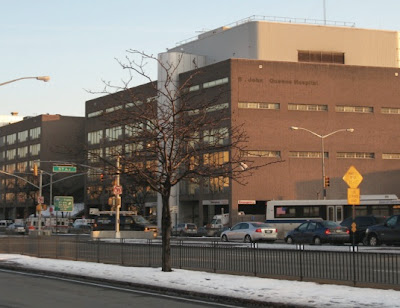 Residents and elected officials are anxiously awaiting word on the future of two Queens hospitals that might be forced to close if their parent company declares bankruptcy.

The executive board of Caritas Health Care, which owns both St. John’s Hospital in Elmhurst and Mary Immaculate Hospital in Jamaica, was set to meet on Wednesday afternoon to discuss the future of the struggling facilities, which each lose about $5 million annually. It is possible that Caritas will vote to declare bankruptcy at that meeting, according to people involved in the discussions.

While both hospitals have struggled financially for several years, news of their impending closure came during Queens Borough President Helen Marshall’s annual State of the Borough Address two weeks ago. “I am extremely concerned today about the stability of St. John’s Queens and Mary Immaculate hospitals,” she told a stunned audience. “I am working with the state to sustain health care in these communities.”

News of St. John’s and Mary Immaculate’s potential closure comes just months after another local facility, Parkway Hospital in Forest Hills, was shut based on a recommendation by the state’s Berger Commission. The closures would fly in the face of findings made in a 2006 PricewaterhouseCoopers study of the future of healthcare in Queens, according to Dan Andrews, spokesman for Marshall.

In response to the news about Caritas, Marshall held an emergency meeting last Friday with other elected officials and community board representatives. “Indications were that the outlook is rather bleak for the two hospitals to remain financially viable,” said Andrews. “At the meeting, both the state health commissioner and Caritas officially agreed that the future of both hospitals is bleak.”

A major concern for Marshall and other officials is “how in the world other local hospitals would absorb the patient load that would be generated, with both doing about 50,000 visits each to the emergency room on an annual basis,” said Andrews. In addition, the closings would result in the loss of about 3,000 jobs, “the majority of which are held by Queens residents,” he added.

The two hospitals have a total of about 400 beds and combined are losing about $5 million each month.

Marshall has reached out to Governor David Paterson for assistance and expects to meet with him soon to discuss health care issues. “She will be asking him to delay any closures and will see if the state has formulated a closure plan, which it is required to do,” he said. “The great concern obviously is for the health care needs of the two communities, and the fact that Mary Immaculate has a trauma center, which is one of only a few in the entire borough.”

However, given the state’s looming $15 billion budget gap, it is not clear now much financial assistance the state can provide to maintain the hospital’s operations. According to a source at St. John’s Hospital, staff there has already been instructed to put together a closure plan, which seemingly would pave the way for the hospital’s closure.

One possible outcome to the problem is a takeover of both facilities by North Shore-Long Island Jewish Hospital, which would close both buildings and construct a new state-of-the art facility in central Queens. In November, LIJ entered into an agreement allowing it to negotiate exclusively with Caritas, according to spokesman Terry Lynam.

“We’ve been in discussions with them as well as with the state, toured the facilities, done our due diligence with regards to their books, and what we have proposed is actually building a new facility for the people of central Queens,” he said Wednesday. “The current sites are antiquated and the feeling is you could deliver much better quality care in a much more efficient manner with a new facility.”

However, Lynam noted that the plans face the possibility of being derailed by the current economic crisis surrounding the state and city. “The obvious issue is money,” he said. “Like all hospitals, particularly in this environment, we don’t have that capital, the hundreds of millions needed to build a 400-bed facility.”

The hospital would need “significant state funding” to complete the project, but “given the state’s financial situation, that’s kind of where it’s hung up right now,” said Lynam.

If that plan ever came to fruition, LIJ would likely cease operations at Forest Hills Hospital, which it also operates. He couldn’t say whether the new facility would be built at one of the sites currently used by St. John’s and Mary Immaculate, or elsewhere in central Queens.
Posted by The Forum Newsgroup at 5:10 PM

what a shame! where will the patients go. if u think you're waiting long now at the emergency room, just wait till these 2 hospitals close.there will be less ambulances too...you better pray that you have a heart attack or a stroke when there's no traffic and your car can go 100 mph..if not..time to kiss the angels!

Public Advocate Betsy Gotbaum has also been outspoken on this issue: www.publicadvocatescorner.com. On Tuesday, at a press conference, she joined local Queens elected officials to call to keep these hospitals open...