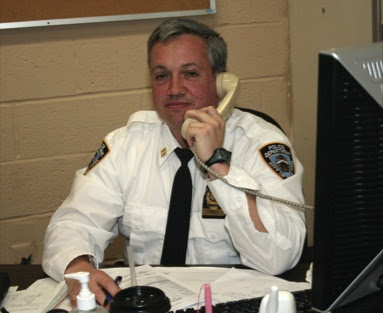 Will Focus on Reducing Traffic Accidents

Capt. Jimmy Kimmel worked in the borough for the last year and a half, but before that he was stationed in the 101st Pct. where according to the Executive Officer there were less accidents in one month than in a day in the 106.

“One of the responsibilities I have as the Executive Officer is the traffic program within the command. I got here about the middle of January and traditionally the 106 - specifically Cross Bay Boulevard, has been a nightmare because of traffic accidents.”

Kimmel says that as part of the program to stave off the traffic accidents, electronic traffic information signs warning about accident-prone locations were installed. Two signs were placed in the confines of the 106, one at Crossbay Boulevard and 107th Avenue right before the troublesome spot at the Woodhaven/Liberty/Rockaway Blvd. Intersection. The other sign is placed at Crossbay Boulevard and the Conduit, also known as a dangerous intersection.

Feedback from the neighborhood has been positive thus far and preliminary accident figures have come in at a lower rate. “We’ve had a 48% in accident reductions this week, but at this point it is impossible to tell if the reduction is a direct result of the signs,” said Kimmel.

“I am hoping that if we can get the message out with regard to simple traffic safety tips that in the long run, are important factors in saving lives.”

Sitting down with the new Executive Officer Jimmy Kimmel was Police Officer Kenneth Zorn, 106 Community Affairs officer. Zorn was quick to point out that not only was the use of the electronic signage a key, the precinct was really looking into how to improve the traffic flow on Crossbay Boulevard which of course is contributing to the accidents. Everyone blames the light 149th Avenue, but the bottom line is pure volume,” confirmed Zorn. There really is nowhere else to go, especially to get to Brooklyn. Unless you know Cohancy Street you’re not going to get through without sitting in a mess.”

In addition, other measures are being taken by the 106 to implement as much traffic safety as possible. “People don’t like to get ticketed, but we are engaging in an initiative to target drivers for specific traffic infractions,” Kimmel said. Cell phone, seat belt and speeding violations are all on the hit parade of summons priority lists because statistics prove they are at the root of most vehicular accidents. According to Kimmel, a review of percentages shows that cell phone involvement is a contributing factor in almost 95% of accidents.

“The worst times for accidents in the 106 is between 8 a.m. and 10 a.m. and then from 4 p.m to 6 p.m.” said Kimmel. “We’re trying to put sector cars along the road in the hopes that the presence of marked cars will deter the incidence of traffic infractions.”

Capt. Kimmel maintains that he considers his responsibility for the traffic problems to be extremely high on the priority list of precinct problems. He reads and reviews every single traffic and accident report as a basis for establishing and understanding effective means to target the problems.

While the late night show host he shares his name with is busy cracking jokes through the late night hours, Jimmy Kimmel at the 106 is busy all day cracking down on motorists who don’t take their driving seriously enough.
Posted by The Forum Newsgroup at 12:35 PM