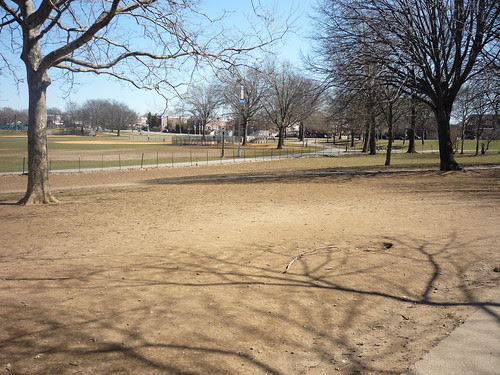 The current off-leash site at Juniper, where a group would like a dog run. The JPCA has suggested a site elsewhere in the park due to the damage already caused to grass and trees in this area.(Photo by Christina Wilkinson)

The push for a dog run in Juniper Valley Park has gained new momentum, with a group of animal lovers now lobbying the local community board for support.

Dogs are currently allowed to run off-leash in city parks from 9 p.m. to 9 a.m., provided the park is open during those hours. That means that residents must bring their dogs to Juniper Valley Park from between when it opens at 6 a.m. until the off-leash time ends at 9 a.m., making it difficult for many people who work.

Joe Pisano, who lives three blocks from the park, has pushed the effort at the monthly Community Board 5 meetings since November. “More and more people in the neighborhood have dogs now and having three hours in the morning as the only legal off-leash just isn’t enough time for everybody… We’re just looking for the opportunity to enjoy our dogs in the park,” he said. “There’s something in that park for everyone except people with dogs.”

The battle over dogs in the Middle Village park goes back a number of years, to when the city Parks Department had an unofficial off-leash policy allowing dogs to run free from 9 p.m. to 9 a.m. In 2006, the Juniper Valley Civic Association filed a lawsuit against the department on the grounds that the policy violated the city health code. The civic association was ultimately unsuccessful, but the lawsuit led to the formalizing of the Parks Department’s off-leash policy.

Now, members of the group Juniper Valley Park Dog Association including Pisano and Terri Sullivan are leading the effort to have a formal dog run area established in Juniper Valley Park. They would like it to be located in the same area currently used during the off-leash hours and are asking the Parks Department to simply erect a fence to enclose it.

“Now there are a lot of younger people who have a renewed energy and really want a dog park,” said Sullivan, who was involved in the prior battle with the JPCA over the issue. “I think it will happen, I just don’t know when.” She called it a natural progression from the off-leash law, which would be repealed in Juniper Valley Park if the dog run is created. “I do believe that it is a natural progression, but I know that the Juniper Civic doesn’t like changing Middle Village.”

However, JPCA President Robert Holden said that the association isn’t necessarily against the dog run, provided that it is done properly. He said that the area where the dogs currently go during the off-leash hours isn’t appropriate due to the proximity of about 30 large mature trees, which he said can be damaged by dog urine. Instead, he would like an area behind the bleachers near the roller hockey rink.

“I did some research and found that it is not a question of if the trees will be damaged – they will be,” he said. “The Juniper Civic is calling on Parks to save those trees, have the dogs immediately removed and the area they’re in now doesn’t become a run. They have done irreparable harm, and arborists have said there definitely shouldn’t be trees in a dog run. It is becoming a dirt area which kicks up. It is a health hazard at this point.”

The Parks Department “is working with the community to meet the needs of all our park patrons – both human and canine,” said a spokeswoman, who noted that while no formal proposal has been submitted for a dog area at Juniper Valley, there have been informal requests made. There are about 100 dog runs throughout the five boroughs, she said.

Community Board 5’s Parks Committee will hold a meeting on April 20 at the location in Juniper Valley currently used for off-leash hours “to try to figure out if there is something that’s better than the current situation,” said its district manager, Gary Giordano. He said the main problem might be finding a suitable location.

“One concern I have is that the current area is between two ballfields, so kids would be in the same vicinity.” While other locations might be more suitable, they likely would be closer to homes than the area currently used. “Even thought it is a big park, is there a perfect location? Probably not.”

In Holden’s opinion, the current location is clearly not appropriate. “You just don’t put a fence around a grassy area because it will quickly become a dirt area. I would hope the Parks Department would be a little more vigilant in protecting our natural resources and trees in general,” he said. “It is one of the nicest spots in the park for strolling, and you can’t avoid it.”

However, Pisano said the area Holden is suggesting near the hockey rink wouldn’t work because it is located in a crowded area near the walking track. Despite the obstacles that must be cleared, he vowed to continue the fight. “We just want to keep the pressure on. We’re not going to go away,” he said. “We’re building up the dog association, and there are more and more people now who are for it. I don’t want to demand anything, but I just don’t understand why it is so difficult.”
Posted by The Forum Newsgroup at 12:45 PM

The location the dog owners would like for a dog park (not run) is actually the best location for some of the following reasons:

• It is centrally located making it accessible by dog owners north/south, east/west of the park.
• It is the furthest spot from surrounding homes thereby reducing any noise.
• An enclosed dog park would allow seniors to let their dogs socialize off-leash without fear.
• An enclosed dog park would spread out dog owners throughout the hours the park is opened instead of squeezing them into the hours before 9 a.m. when they are allowed off leash. Again this reduces noise and brings people in the center of the park which is good for all.
• The area decided is backed up against the baseball outfields on both the east and west sides. The open fields means there is space around the dog park. Locating it by bleachers, the track, hockey rink, etc. likely means the dogs would be subject to intense noise from nearby activities that would encourage barking and excite dogs, especially when the stands are full of screaming fans.
• The trees provide necessary shade in warmer weather. Dogs do not sweat and need shade.
• There is a drain nearby for any run-off.
• There are nearby waterlines in the event money is found to install a dual people/dog water fountain.
• The area is surrounded by paved walkways, allowing easy access by dog owners, families wishing to watch the dogs from outside, and Parks Department maintenance trucks.
• The trees can be easily protected with readily available (inexpensive) tree rings topped with wood chips.
• The Parks Department has a big supply of woodchips. This is important since the Longhorn Beetle threat requires that wood chips be used within certain zones to reduce the possibility of spreading this plague.
• There is lighting nearby so users are safe and police can monitor the facility as they do other areas of the park.
• The paved path through the desired area is a perfect demising line to create two areas: one for large dogs and another for smaller dogs. The paved path bisecting the space can hold the benches the dog owners have agreed to supply.

Mr. Holden raises some interesting points that should be addressed. He is well meaning in his desire to protect the trees. The barren areas caused by extensive use have not caused “irreparable harm” as Mr. Holden alleges. Interestingly, I was recently at a restaurant near Tompkins Square in Manhattan. After dinner my wife, kids, and I walked through the square and noticed their dog park. It is magnificent. There are huge trees in the dog park and they seem to be doing just fine.

As shown, his concerns can be addressed at reasonable cost. His other comment about the dust being kicked up and it being hazardous is simply wrong.

Dog parks have become highly desired facilities in parks throughout North America. In some towns, they are intentionally placed directly near children’s playgrounds because the presence of adult with their dogs is an added measure of safety. A higher the concentration of responsible people lowers instances of graffiti, senseless damage, or inappropriate behavior.

The dog owners would become another active organization helping to maintain Juniper Valley Park. Their contributions are the type of things the civic association has encouraged. lawsuit is long over and it is time to work together for the benefit of all of Middle Village / Maspeth.

Oh, one final thing. The desired area shown in the satellite photo is shaped like a dog biscuit, so maybe it is fate that the dog park should be there!

Middle Village Dad
*We live off Metropolitan near the park

I frequent Juniper Park and see dogs of all types throughout the day. I think its a great idea for a dog park. I think it would be great to see the dogs all running and playing together in an area that is safe for everyone in the park.
I see that Mr. Giordano said that the current area is too close to the ball fields and potential 'children' playing there. Well if memory serves me, the ballfields on one side are completely fenced in and on the side its a good distance away. Furthermore, Mr. Holden is suggesting putting the dog park BETWEEN a hockey rink and a running track/soccer field/football field and in close proximity of the batting cages and those 3 fenced in baseball fields. Do you want it away from children or right in the center of hundreds of them.
Most people who walk in, around and through the park do so on the out skirts. Few people cut across at the current location. But even with a dog park (fenced in) at that location, there are still paths running along both sides of the dog park where people could safely cut across. Maybe they will even stop for a few moments and watch the 'DOG SHOW'.
Its time....put in the dog park and watch if flourish!