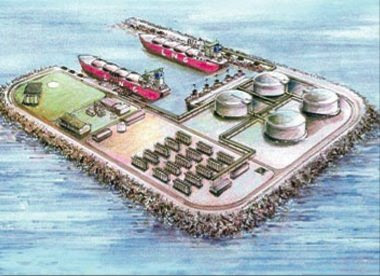 Environmentalists are gearing up to fight a company’s proposal to build a man-made island off the Rockaway coast that would be used to store liquid natural gas delivered by huge tankers. Concerns include environmental and security issues - and some question whether the need for natural gas imports even exists.

The Atlantic Sea Island Group has applied for federal permits needed to build the Safe Harbor Island thirteen miles off the coast. The island would be at least 60 acres at the water surface and more than 110 acres at the ocean floor, containing about 700,000 truckloads of fill – ten times the volume of the Empire State Building. Tankers from nations such as Russia and Iran would deliver the liquid natural gas, which would then be converted to natural gas and transported to consumers through an existing pipeline.

At a joint meeting Tuesday night hosted by the Jamaica Bay Eco Watchers and the Rockaway Park Homeowners/Residents Association, a New Jersey-based group called Clean Ocean Action educated residents about the proposal, and the need for residents in both states to fight it. “This is not a company that appreciates how important the ocean environment is to those who live here,” said Cynthia Zipf of Clean Ocean Action.

The project has also caught the attention of environmental groups in the Rockaways. “This particular project slipped past the radar screen,” said Dan Mundy, Jr. of the Jamaica Bay Eco Watchers. “It’s been a long road to get the ocean back – it’s amazing how much improvement there’s been in the past 20 years.” He added that it was “not by accident” that many residents are now aware of this “stealth project.”

Aside from the environmental implications, some residents and officials are concerned about the potential for a large-scale accident or terrorist attack. “It will create the perfect terrorist target,” said Mundy, Jr. during the meeting, which attracted a large crowd in PS 225 in Rockaway Park. “The bottom line is, at the end of the day nobody here benefits from this. It’s the first step in basically an industrialization of the ocean.”

Zipf echoed the sentiment that we “don’t want to turn our oceans into an industrial park” as she presented a PowerPoint presentation on the proposal. She said the key to fighting it is to “galvanize” residents in both New Jersey and along the South Shore of New York. “We have got to be loud and clear,” she said.

After hearing about these proposals for liquid natural gas docking stations, Clean Ocean Action investigated this type of energy to see if there might be a benefit to U.S residents. “What we came to was the conclusion that LNG is not in any of your interests.” Instead, it will only benefit “big corporations that stand to make millions.”

According to Clean Ocean Action, 97% of the nation’s current need for natural gas comes from sources within North American, with 86% produced within the United States. In addition, two LGN facilities that opened in the Gulf of Mexico off Louisiana and Texas are only operating at 10% capacity because the demand for imported LNG doesn’t exist, said Zipf. “We should be fighting back against becoming addicted to another foreign country” for our energy needs, she added. “We don’t want to go down that road again.”

Congressman Anthony Weiner told the crowd that there is “a lot more we don’t know about this proposal than we know” and said the Coast Guard will hold a public hearing on the proposal before any approvals are granted. “Until we know some of those answers, none of us are in a position to sign off on it,” he said. In order for it to be approved, it must be safe in terms of both security and environment, and must make sense economically. “I have not seen scrap paper one from a non-biased source answering those questions.”

In a statement, Weiner previously vowed to use his seat on the Energy and Commerce Committee “to ensure that New York City residents are not ignored in this process… If we are going to make an informed decision we need to hear from the federal agencies and Atlantic Sea Island Group.”

Company officials were not present at the meeting, and have not responded to several requests seeking comment on the proposal. Howard Bovens, chairman of Atlantic Sea Island Group, told the Daily News that the company would spend at least $700 million in contractor wages for the project, which he claims will result in cheaper energy costs. “We don’t pose a threat to people. We think we bring a lot more benefits to the South Shore than problems,” he said.

The proposal is just one of three being considered for the waters between New Jersey and New York. Exxon previously attempted to get approval to build a floating island in the Long Island Sound, which has never been attempted before, but the governor of Connecticut rejected it. The same plan was also rejected in California. In addition, a company called Excalibur is considering seeking approval for another island off the coast of Asbury Park, New Jersey. In addition, the Atlantic Sea Island Group has never completed this type of project in the past, something that further concerns residents.

Currently, state governors have the ability to veto these types of projects, which is why the proposals for California and the Long Island Sound didn’t materialize. Zipf said that New Jersey Gov. Jon Corzine has supported LNG in his Energy Master Plan, but Gov. David Paterson has yet to take a position, and still has the ability to nix the Safe Harbor Island proposal.

For Zipf, the key to fighting this is for residents and officials opposed to all three proposals to band together. “They said we could never end ocean dumping [but] the power of the people won that day,” she said. “We absolutely can do it – it’s just a matter of gearing up for this battle.”
Posted by The Forum Newsgroup at 1:00 PM