Crime Down, Arrests Up Across 104th Precinct 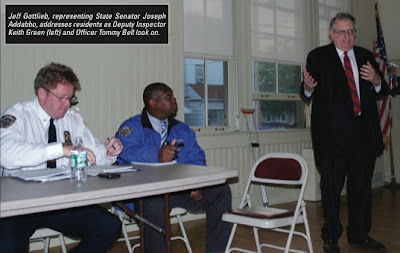 Major crime is down nearly eight percent in the 104th Precinct through the first 20 weeks of 2009, residents learned at last Wednesday’s COP 104 meeting in Maspeth Town Hall. While burglaries mark the only major crime to have increased so far this year, residents learned of a major arrest police officials hope will put a dent in that category.

To date, arrests are up by 17 percent for all crimes, and up 30 percent for major crimes, which include murder, rape, robbery, felony assault, burglary, grand larceny and auto theft. According to Deputy Inspector Keith Green, there have been 580 major crimes so far this year within the precinct, which covers Ridgewood, Glendale, Maspeth and Middle Village, compared to 629 at the same time last year.

On the flip side, burglary marks the only major crime that has increased compared to last year, according to Deputy Inspector Green, with 164 in 2009 compared to 152 at the same point last year, an eight percent jump. However, he hopes burglary incidents slow down with the arrest of two individuals responsible for at least 20 residential breakins in the Glendale area.

Helen Velasquez, 43, and Jose DeJesus, 22, were responsible for a “very noticeable” burglary pattern between 65th and 67th streets and Otto and Central avenues in Glendale, according to Deputy Inspector Green. Velasquez, of 387 Woodbine Street and DeJesus, of 218 Boerum Street, were recently caught breaking into a home and have been charged in connection with 20 incidents. They may be charged in additional break-ins as the investigation unfolds, said Deputy Inspector Green. “That is how burglary tends to go- one or two people can really hit us hard,” he said.

Overall, burglaries have been “spread out” across the precinct, with about 70% targeting residences and 30% commercial buildings, said Deputy Inspector Green. “They really are pretty well spread out when we don’t have a pattern,” he said, noting that the current residential/commercial ratio has been skewed by the rash of Glendale burglaries. Those perpetrators were targeting residences both at night and during the day, mainly entering through windows accessed by fire escapes and roofs.

Rounding out the major crime statistics, there has been one murder this year – the unsolved killing of 64-year-old Rosario Prestigiacomo inside his home at 20-33 Green Avenue in Ridgewood. Police responding to a 911 call at about 2:15 p.m. on February 10 found the Italian landlord lying on the floor with multiple stab wounds. There were no murders at the same time last year, and all four homicides that eventually occurred within the precinct in 2008 were connected to a fatal fire on Metropolitan Avenue that investigators say was deliberately set. There have been seven rapes this year compared to eight last year, and there have been 120 car thefts so far, a decrease of 9.

During the public comment portion of the meeting, Roe Dario, president of the civic group Communities of Maspeth and Elmhurst Together, asked the precinct about cracking down on unauthorized commuter vans, which she said cause traffic issues.

“There are a lot of open issues with the vans, so civically we don’t want them in our community,” she said. “Hopefully we can get them out of here… We have enough traffic.” Deputy Inspector Green said the precinct is working on a crackdown of commuter vans, which must get a permit from the city to be legal.

However, there was one issue raised at the meeting that the deputy inspector declined to comment on. A resident asked about potential funding cuts the NYPD is facing due to the city’s budget woes, and rumors that civilian administrative jobs would be cut. Under that scenario, uniformed officers would be taken off the streets and put into those administrative roles, the resident claimed, asking how that situation would impact the 104th Precinct specifically.

“Right now it is just ‘a what if’ [scenario] and is not an issue I’m free to discuss,” responded Deputy Inspector Green. He told the resident he must contact NYPD headquarters at One Police Plaza about that issue and noted that the precinct is currently fully staffed to the same levels as two years ago.

Robert Holden, president of the Juniper Park Civic Association, asked the precinct to crack down on vandalism in the park. He said that several trees were recently planted throughout the 55-acre park in Middle Village and already some have been snapped by vandals. “It is most likely youth hanging out in the park,” he said, adding that there have been incidents of vandalism almost nightly and noting that the bleacher area near the roller hockey rink has become a “big hangout.”

Another resident asked Deputy Inspector Green to address speeding along 77th Place between Caldwell Avenue and 58th Avenue. “I tell you I hear the engines as they go racing down that block,” the resident said.

Finally, a resident complained about noise and disturbances at the Moonlight Bar, which he said prompted him to call the precinct and 311 numerous times. “I know it’s minor for you guys, but what can I do?” he asked the officers. He said a lot of the problem stems from the fact that the bar’s front door is often left open as a DJ plays music inside. When neighbors complained, the “owners said call the police, we don’t care,” the resident said.

Deputy Inspector Green said officers have “been there quite a bit lately” to deal with calls. He said the bar at 6058 Flushing Avenue in Maspeth “is on our list” of establishments that have received numerous complaints in recent months. He said the bar “has had problems in the past, was shut down for a while, then reopened and was okay for a while, and is now a problem again.” He said the Community Board 5 has also received “a lot of calls” regarding Moonlight Bar.
Posted by The Forum Newsgroup at 1:40 PM