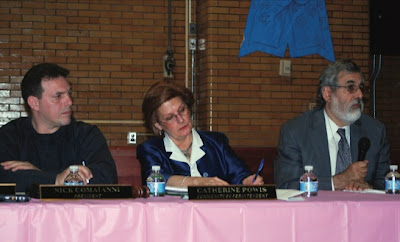 As swine flu continues to spread around the city, contributing to several more deaths and resulting in additional school closures, many parents and teachers feel the city isn’t taking the threat seriously enough.

Deputy Mayor Dennis Walcott touched on the city’s response to the outbreak at a meeting on mayoral control last week in Middle Village, and Dr. Roger Platt, assistant commissioner of the Department of Health’s Bureau of School Health answered questions at Tuesday night’s Community Education Council 24 meeting in Glendale.

However, despite hearing the city’s rationale behind closing some schools while leaving others open, many parents and teachers expressed displeasures with the city’s handling of the H1N1 outbreak, which now has contributed to four deaths across the city.

“We’ve tried to be very consistent as far as the criteria for closing schools,” Walcott told concerned parents last week, adding that it is not based solely on attendance rates or trips to the nurse’s office. “I totally disagree with you that it’s not being taken seriously” he told one teacher who criticized the city’s response. “It’s important that we have a citywide standard… System wide closing has not proven to be effective.”

At CEC 24’s monthly session, which was moved to PS 113 because PS 58 was one of the schools closed due to the outbreak, Superintendent Catherine Powis reported that PS 143 and IS 73 were set to reopen Wednesday (May 27) and PS 58 was to open the following day. However, many parents later expressed dismay over the criteria used to make decisions regarding school closures.

Dr. Platt stressed that closing schools “is not going to prevent the spread of this flu through the city” and warned that he doesn’t “think that absentee rates is a good guide” as to whether a school should be shut. He also repeatedly argued that for the “vast, vast majority” the symptoms only last several days and are not life-threatening for those who are otherwise in good health. “The most important message in all of this is, if you’re someone in a high risk category… at the very first sign of illness you must contact your doctor… Those are the people we are trying to protect when we close schools.”

The doctor also noted that closing schools obviously doesn’t prevent children from mingling in other settings. “We have to be realistic from a public health perspective as to what we can accomplish when we close schools,” he said.

Nick Comaianni, president of CEC 24, said he was one of those who wanted all schools closed, at least throughout the hard-hit district, when the outbreak first occurred. “Obviously it’s easier to transmit the virus in closed quarters,” he said, adding that school closings “give parents piece of mind” knowing the building was thoroughly cleaned. “Most of these absences… are due to parents keeping their children home due to anxiety,” he said.

Dr. Platt responded that, while it is “difficult for people to accept,” there is “little or no” benefit to closing schools since the virus doesn’t live for long on ordinary surfaces. “Should we observe routine hygiene standards in schools? No question about that.” But closing and cleaning is not a strategy that is “supported by any experts… People expect it, and it does make people feel better about the schools, but it is not really useful to stop the spread of flu.”

CEC Vice President Peter Verccessi asked what percentage of students must have flu symptoms for a school to be closed. Dr. Platt said that the “rule of thumb” is for a nurse to report to the Department of Health if at least five students have a fever. At that point the school is placed on a watch list, meaning health officials “look very carefully at that school” several times a day. If two percent of the population has symptoms on a given day, or if a pattern is detected, “it is very likely [the DOH] will recommend it close.”

CEC member Bill Kregler suggested that the handling of the situation is being controlled by politics instead of health factors. “Our children are pawns once again on an issue that politicians are bouncing back and forth.”

At one point the doctor admitted that there is “no question” that closing every school and quarantining all students would slow the spread of N1H1. “The question is, is it worth the price?” he added, drawing yells from members of the audience who clearly feel that the disruption to the school year is warranted.

One resident asked if the city will be prepared for flu season, considering how hard this virus has hit the city during warmer months. Dr. Platt said that the Center for Disease Control is working “furiously” to develop a swine flu vaccine. He warned it “may very well come back in October” in “more severe form… That’s what people [health experts] are worried about.”

A teacher from PS 229 told the doctor that it “infuriates” her when officials say the symptoms are mild. “I think it’s being downplayed,” she said, adding that two faculty members at PS 229, including one 30-year-old teacher, are still recovering from the flu. Dr. Platt responded that the two to three days of symptoms is merely an average. “I don’t think there is any question people are sick with that illness for longer.” He also said it’s possible those teachers don’t have swine flu.

Still, despite all the assurances that this situation is not much different from flu outbreaks that occur every week, some, including teacher Rosemary Parker, remained unconvinced. “I have never seen 40 kids lined up outside the nurse’s office,” she said. “I don’t think the DOH is taking this serious enough.”

“They’ve been playing politics with our health… for two weeks now and it has to stop,” added teacher Dermot Smyth.

Jeanette Bartels, parent of three students at PS 229, said that it seems like the city is “playing with a loaded gun.” She pointed out that students are transported to schools on buses that are also used for students at schools that were closed such as PS 58. “Why didn’t we just shut the system down?” she asked, repeating a question that was asked numerous times throughout the meeting.
Posted by The Forum Newsgroup at 1:45 PM