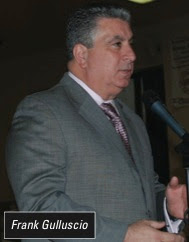 Will Face Ulrich in November for Council Seat

Queens County Democrats have cleared the field for Frank Gulluscio to return to the race for the City Council seat in the 32nd district in November. Gulluscio failed to make the ballot for the special election in February and Republican Eric Ulrich landed the seat by defeating Democratic challengers Lew Simon, Geraldine Chapey, Glenn DiResto and fellow Republican Mike Ricatto.

In a party selection process held at county on Tuesday morning, Gulluscio garnered the support not only of county party brass but also from his two former challengers, Simon and Chapey. “I was running right up to the end,” said Lew Simon. “Unfortunately the many people who wanted me to run could not afford to give me the financial backing I needed.” Simon said the difficult economic times were a major contributing factor in his decision not to run. “At the end of the day, I support Frank because that is what is for the best of the party, and it’s the right thing to do.”

“I’m ecstatic that the party has come together,” said Gulluscio, “and I look forward to a good race based on the issues and the principles that people are interested in.” Gulluscio said he enters the upcoming race without a primary challenge and with much support he is pleased to have.

Incumbent Councilman Eric Ulrich says that the voters will decide who is best to lead the district as of November. "Elections are not about chances, they're about choices. The people elected me to serve them,” Ulrich said, “and I will seek re-election on my own merits and on my own record, regardless of whom my opponent may be. November is a long way off. Right now, my sole focus is on doing the job the people have asked me to do."

Both candidates have repeatedly expressed their disdain at the type of political antics that were so much a part of the special election for the seat and have vowed to concentrate on the issues and focus on the people in the 32nd Council district.